Biden Administration Calls In FEMA To Help With Kids At Border 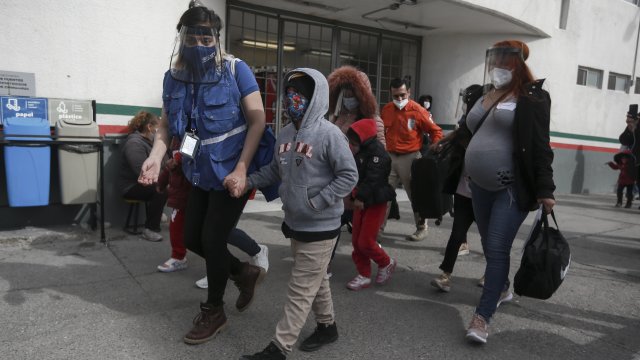 SMS
Biden Administration Calls In FEMA To Help With Kids At Border
By Alex Arger
By Alex Arger
March 14, 2021
FEMA to help the thousands of kids avoid being treated as detainees of Customs and Border Protection for the next three months.
SHOW TRANSCRIPT

Along the Southwest border are thousands of migrant children--alone and waiting.

They are part of a record-breaking surge of kids trying to get into the U.S.... showing up unaccompanied by parents or family members.

The Biden administration has deployed the disaster agency FEMA to help out.

Homeland Security can only place a fraction of those children with sponsors.

"There is no doubt today that what we are seeing today is an enormous challenge and it's unacceptable."

The Federal Emergency Management Agency will support a government-wide effort over the next three months to shelter and transfer these minor children who are arriving by the hundreds every day.

The goal is to place the children with a parent already living in the United States, or a sponsor, until their immigration cases can be resolved.

The step hopes to ease jam-packed Border Patrol holding facilities designed for adults, which have become overcrowded with nearly 4,000 kids in recent days.

"There are fewer licenses facilities... (all the way thru)... in a shelter."

Growing reports say parents have increasingly sent their kids across the border alone while they stay in their home countries, and many believe they have a better chance of entering the U.S. now that President Biden is in office.

Republicans say the problem is being caused by what they see as a weak approach to immigration under the Biden administration. Democrats blame misinformation being spread by smugglers and say the Trump administration dismantled the border process.

"It doesn’t matter what you call it. It is an enormous challenge, it is front and center for the president."