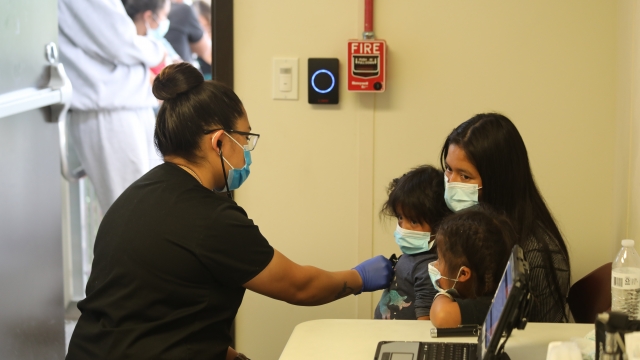 Dozens of migrants arriving at a time to El Paso’s largest shelter. Surprisingly, none of them have been tested for COVID, despite days in Border Patrol custody.

In fact, Newsy has confirmed Border Patrol is failing to test most migrants before they’re released under supervision into cities across America.

"We have the ability, the capability, to test everyone," said Ruben Garcia, the director of a nonprofit running El Paso's largest shelter.

It is usually volunteer groups in border towns that test them for the first time after Border Patrol releases them. If someone is positive, they are sent to a COVID hotel to quarantine.

El Paso County runs the hotels here. It's just one of many responsibilities taken on by local government and nonprofits that those working on the front lines believe should be the job of the Biden administration

"The Biden administration was exposing Texans to COVID. That is a neanderthal-type approach to dealing with the COVID situation," Texas Gov. Greg Abbott said.

"He's refused to give FEMA permission to allow them to give us the funds that local communities would need to make sure that 100% of the migrants arriving on the border are being tested," she said.

Despite the bickering, the burden is building in El Paso as 1-2 planes arrive each day with dozens of migrants on each flight. They aren’t tested before boarding so nobody knows if they are spreading COVID while in transit.

"That's the scary part. I mean, that's why the testing has to be happening at the ports of entry as part of the processing of the migrants," Holguin said.

Advocates here suspect Gov. Greg Abbott will use migrants as scapegoats if Texas sees a spike in COVID cases. The governor just reopened Texas to 100% capacity and got rid of the mask mandate.

"It is incredibly disingenuous. Is the governor going to set up testing sites on all of the freeways coming into Texas?" asked Garcia.

Local officials shared statistics with Newsy showing as of Friday, fewer than 30 people were positive out of 944 in El Paso's care, a much lower positivity rate than the Texas average.

Newsy reached out to the El Paso Customs and Border Protection sector multiple times for interviews and were denied. They sent us a photo showing they're doing health screening and said in a statement they are "very fortunate" to work with local El Paso officials and local NGO shelters, but did not say why they aren't doing the testing themselves.

For now, local officials say they’re prepared to do their part because ultimately it's about more than the pandemic.

"This is a humanitarian crisis. This is an urgent situation. El Paso has never been a community to turn its back on anyone," Holguin said.