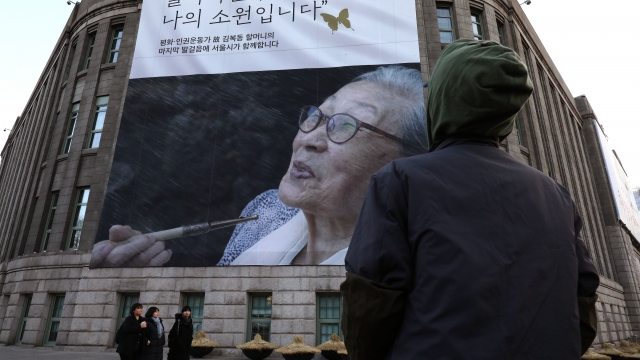 Hundreds of South Koreans holding yellow paper butterflies gathered at the Japanese embassy in Seoul on February 1st — both in mourning and in protest.

The butterflies are symbols of the wartime rape survivors around the world whom former sex slave and activist Kim Bok-dong spent her life advocating for — until she died of cancer on January 28th at age 92.

On CNN, Kim said the physical abuse was permanent. "I can't put into words the scars it left me with. It still keeps me awake at night. ... In my old age, I couldn't have a single person who can call me mother. I could never have a child."

Nearly 50 years after she was finally returned home, where she hid in shame, Kim broke her silence.

She led a weekly protest at the Japanese embassy along with more than 200 other so-called comfort women. Kim demanded an official apology and legal reparations from Japan for all the survivors, which they have never received. In fact, at one point, Japanese Prime Minister Shinzo Abe  denied that the women were coerced to have sex with the soldiers.

Japan, for its part, paid South Korea over $8 million for a foundation to care for the surviving women in 2016. But the comfort women and many South Koreans did not feel it was enough to restore the women’s honor. And the foundation was dissolved in 2018.

Kim left all her savings to her own Butterfly Fund that she created for wartime rape survivors around the world, but the question remains if the surviving comfort women will ever see the respect and apology they’ve been demanding for nearly three decades.