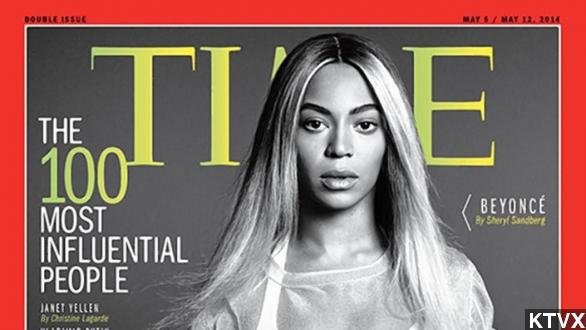 By Katherine Biek
April 24, 2014
Time magazine chose Beyonce to be the face of its "100 Most Influential People" issue. Beyonce was included in the "titans" category.
SHOW TRANSCRIPT

Time magazine's list of the 100 most influential people of 2014 is out, and superstar Beyonce is the face of the special issue.

The singer, who surprised fans with a brand-new album last December that broke record sales, is featured on the magazine's cover, which hits newsstands Friday. (Via YouTube / beyonceVEVO)

Sheryl Sandberg, the author of the book "Lean In," wrote a tribute to B for the publication, saying: "Beyonce doesn't just sit at the table. She builds a better one." (Via Wikimedia Commons / World Economic Forum)

Sandberg goes on to say: "In the past year, Beyonce has sold out the Mrs. Carter Show World Tour while being a full-time mother. Her secret: hard work, honesty and authenticity." (Via Time)

A writer for Entertainment Weekly points out Beyonce was included in the magazine's "titans" section along with Hillary Clinton and Amazon CEO Jeff Bezos, instead of getting lumped into the "artists" category, which features more of the actors and musicians.

ABC reports that Time's 2014 list includes 41 women, which is the most honored in any of the 11 years the list has been produced. Of course, that still makes women the minority in this case.

The Los Angeles Times reports Time Editor Nancy Gibbs stresses this top 100 list is a compilation of the most influential people, not the most powerful.

"The vast majority of this year's roster reveals that while power is certain, influence is subtle. ... If there is a common theme in many of the tributes, it's the eagerness to see what some engineer, actor, leader or athlete will do next."

So what's next for Beyonce now that she's officially the most influential person of the year? She and her hubby Jay-Z just announced that they're going on tour together starting in June.