Beyonce, Jay-Z, Solange: How The Drama Unfolded On Instagram 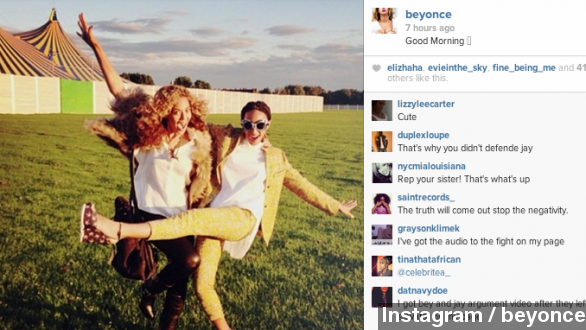 SMS
Beyonce, Jay-Z, Solange: How The Drama Unfolded On Instagram

By Lauren Zima
May 14, 2014
With the three remaining relatively silent since their elevator drama the media has had few places to turn for info.
SHOW TRANSCRIPT

So this week has been all about Bey, Jay and Solange ... whose name we wish rhymed with theirs.

With the three remaining relatively silent — no statements — since their elevator drama went viral Monday, the media has had few places to turn for info. Namely, unnamed "insiders" and Instagram. (Via TMZ)

When it comes to celebs, Instagram is not the place for filter-heavy food photos — it's a source for speculation.

First there were the headlines Monday — not long after the video hit the Internet — about Beyoncé posting a photo of a prayer, decreeing she was crying out for help over the incident. (Via Radar Online)

The prayer was about relationships — posted just a few days after the Met Gala. Of course, it made no direct mention of Solange or Jay-Z, but inferences were made. (Via Instagram / beyonce)

Then news Tuesday that Solange had deleted most photos of her sister from her Instagram. (Via Rolling Stone)

Which appears to be true, although a few remain. (Via Instagram / saintrecords)

And Wednesday, news that Beyoncé had posted several photos of her and her sister on Instagram. (Via Us Weekly)

Three of Beyoncé's newly posted pics appear to be throwback photos. They're not captioned and are from different events and places. (Via Instagram / beyonce)

But one does read, "Good Morning." So are the sisters together?

Photos. Together. Well, that shows just about the same united front that media said Beyoncé and Jay-Z put on at a Brooklyn Nets game Monday night after the story broke. (Via The Sun)

The current whereabouts of all three parties are unknown, although some outlets have said Jay-Z was out shopping with Solange. (Via Gawker)

Right now, there are tons of rumors as to why the violent attack went down.

That Jay wouldn't let Solange's friends into a party, that he called Solange a bad mom for partying too much, that he wanted to party with Rihanna and not Beyoncé and Solange got mad. (Via Perez Hilton, New York Daily News)

Oh, and by the way, Beyoncé just posted a photo of her and Rihanna. On Instagram. And the headlines continue. (Via MTV)