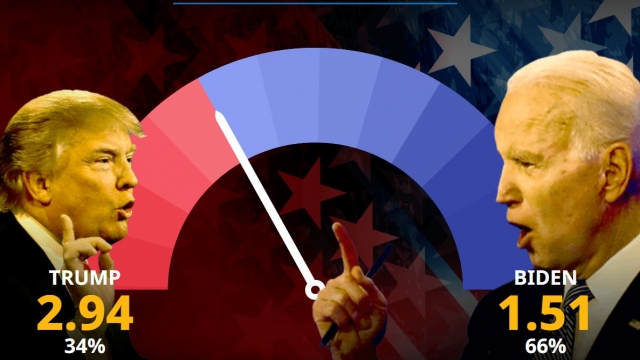 SMS
Bettors Abroad Are Wagering Record Amounts On U.S. Election
By Ben Schamisso
By Ben Schamisso
November 2, 2020
Hundreds of millions of dollars are being wagered on the U.S. election — the largest betting event in history, say gambling experts.
SHOW TRANSCRIPT

It's not just Americans who are obsessed with the presidential election.

Gamblers abroad are wagering a record amount of money on the contest, dwarfing the amounts placed on any sporting event or previous political race.

"We've never seen anything like this before. This is the biggest single betting event of all time," said Sam Rosbottom, a PR executive at Betfair, a London-based online betting company.

More than $350 million has already been wagered on the U.S. election on the Betfair Exchange, the world's largest online betting market.

That's more than the combined amounts for the four most-bet-on sporting events:

"It's very much the Donald Trump factor," Rosbottom said.

Rosbottom says President Donald Trump's surprise victory in 2016 has captured gamblers' imaginations. The president's odds on the market are around 34% — significantly higher than most election forecasts.

"There is no way on earth that Donald Trump has a 33% chance," Krishnamurty said.

Besides backing a Biden victory, Krishnamurty is also betting on the former vice president to win 320 or 340 electoral college votes.

"I think that Joe Biden is a really good bet to beat all of his handicap targets," he said.

Other appealing factors for U.S. election gamblers are the longevity and volatility of the contest.

"Back in February, for example, when it didn't look as though Joe Biden would be the presidential candidate for the Democrats, he was 99-1 to become the next president of the USA," Rosbottom said.

In fact, in the U.K. and other countries where political gambling is legal, bettors can already wager on the 2024 presidential election.

Not in Vegas though, or anywhere else in the country. Wagering on political races is illegal in the U.S.

But overseas, betting on the current election will remain open until a winner is officially declared.

"If the election does go on for days because they're counting mail-in votes or because there's legal challenges, you know, this will just go on and on. And it could mount in the billions," Krishnamurty said.