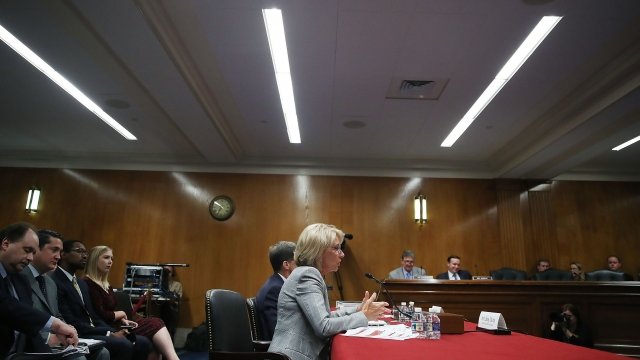 Secretary of Education Betsy DeVos told a Senate subcommittee that a commission tasked with examining school safety won't consider the role of firearms.

The Tuesday hearing was supposed to focus on the Education Department's budget proposal for the next fiscal year. But a few senators had questions about the administration's Federal Commission on School Safety.

"Will your commission look at the role of firearms as it relates to gun violence in our schools?" Sen. Patrick Leahy asked.

"That is not part of the commission's charge, per se," DeVos said.

President Donald Trump created the commission, which DeVos heads, after the school shooting in Parkland, Florida.

The White House directive lists "age restrictions for certain firearm purchases" among its areas of focus. And the commission's website also says it will look at that.

A spokesperson for the Department of Education later told a few media outlets the commission is considering age restrictions for firearms. But based on DeVos' statement, it seems the commission won't take a larger look at how guns affect school violence.