DeVos Fights Back After Critics Take Aim At '60 Minutes' Interview 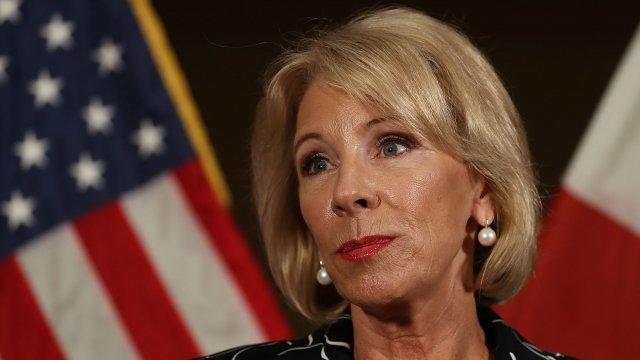 SMS
DeVos Fights Back After Critics Take Aim At '60 Minutes' Interview
By Ethan Weston
By Ethan Weston
March 12, 2018
Betsy DeVos says "60 Minutes" chose to ignore some data she gave the show on the need for school choice.
SHOW TRANSCRIPT

Education Secretary Betsy DeVos is fighting back after critics lambasted her performance on CBS' "60 Minutes."

On Twitter on Monday, DeVos said she shared data with "60 Minutes" showing students need more schooling options nationwide and the show chose to ignore it.

This is at the core of DeVos' argument in favor of charter schools — more options will force public schools into competition and they'll have to improve.

But when pressed about how that's worked out in her home state of Michigan, DeVos couldn't say public schools were doing any better — only that "pockets" had improved.