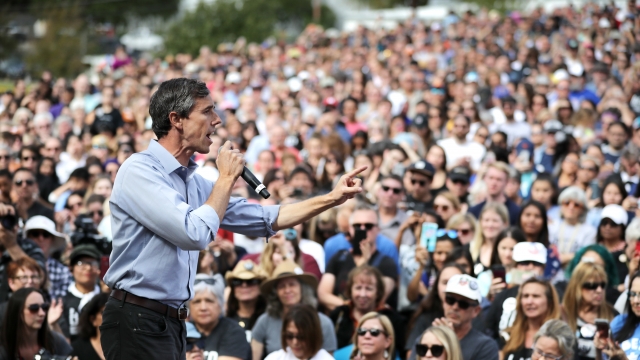 "Muy buenos dias from Yosemite Valley, here in California, where we are announcing the most ambitious climate plan in the history of the United States."

Appearing amid a picturesque backdrop of Yosemite National Park in California, the former Congressman from Texas called for eliminating "tens of billions of dollars" in federal tax breaks for fossil fuel companies and hiking taxes on corporations and "the wealthiest among us" to address the climate crisis.

O'Rourke's plan would invest $1.5 trillion in federal tax dollars in grants for new housing and transportation models that can reduce America's carbon footprint. Additionally, he wants to create incentives to raise an additional $3.5 trillion from individual states and the private sector to improve infrastructure in the face of severe weather events from drought and floods to hurricanes and catastrophic fires.

"We will ensure that we are at net-zero greenhouse gas emissions by the year 2050 and that we are halfway there by 2030 , a little more than 10 years from now. That means mobilizing $5 trillion dollars. It means investing in people and communities and the technology that will allow us to be the leader in the world in ensuring that we're there for the next generation."

O'Rourke also strongly endorsed the state's high speed rail project, plagued by cost-overruns and delays, as a positive step towards a sustainable climate.

"San Francisco, how are we doing? Oh my gosh, it is so great to be back here. I'm sorry that we're a little bit late. Our plane out on the tarmac for 30 or 40 minutes. All I could think of was high-speed rail the entire time I was there. We've got to get that done."

O'Rourke has been campaigning across California, which has moved its presidential primary up from June to March 3 - when 8 states are due to vote on Super Tuesday.