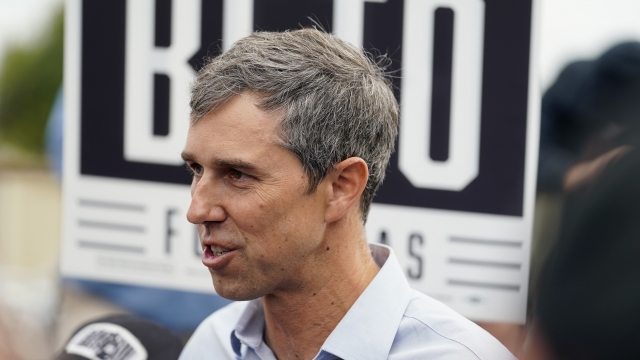 SMS
Beto O'Rourke Speaks To Newsy About New Bid For Texas Governor
By Newsy Staff
By Newsy Staff
November 16, 2021
He will be taking on Republican Gov. Greg Abbott in the 2022 Texas gubernatorial race.
SHOW TRANSCRIPT

Joining Newsy’s Chance Seales is Texas Democratic gubernatorial candidate, and former Congressman, Beto O'Rourke — famously on the road all the time. We find him in Laredo, Texas Tuesday evening.

NEWSY'S CHANCE SEALES: Thank you for your time, sir. What is the first thing you want to fix in Texas?

BETO O'ROURKE: I want to make sure that the best jobs in America are being created here in Texas. About 40% of those who work in the state right now do not make a living wage and that means that they struggle to pay the rent or meet the mortgage note or put food on the table — very often, they're working a second or a third job. When you have a job that you can count on, that actually pays, so much more as possible for you and your family and as I travel the state, including right here in Laredo right now, this is the number one issue on the minds of the people that I want to serve as governor.

SEALES: Trump won Texas easily just last year, 52 to 46 over Biden. The polls are trending against Democrats, nationally at this point — I know you're watching those. You are polling consistently behind Greg Abbott in Texas. The most recent one was from UT Austin. Why jump in?

O'ROURKE: The opportunity for Texas is too great not to get in this race and fight for a better future. And whether it's creating better jobs, as we discussed, or making sure that we have world class public schools at a time that seven out of ten fourth graders in a Texas public school classroom cannot read at grade level or making progress on things that most of us actually agree on, like expanding Medicaid or legalizing marijuana — broadly popular issues that people would like to see get done but lack for the leadership right now. I want to make sure that we come together and get past the smallness and divisiveness of this moment and do the big thing. So no more culture wars, no more abortion bans, no more permitless carry laws and an expectation of competence from those in positions of public trust. We had an awful winter storm and power bridge failure that costs hundreds of Texans their lives. We've also lost 72,000 of our friends and neighbors and family members to this COVID pandemic because we have a governor who doesn't trust and believe in the science and the public health experts. So, there's a lot to get done in this state and I want to make sure that we come together and get after it. And that's why I'm running.

SEALES: I hear you highlighting kitchen table pragmatism right there. but you did mention public schools. Education is suddenly this leading issue nationwide. Virginia is a purple state — It's really mostly blue at this point but we saw what just happened: With Youngkin, winning their schools was front and center. Texas is not a purple state just yet. I know people predict that's going to happen very soon, but we know that many people want to talk about education. Many parents don't like the centralization of race in schools right now. And you know the refrain on many issues when it comes to schools: Parents matter. How will you address education?

O’ROURKE: So my wife, Amy, and I are parents of three kids in the public schools in El Paso: One in high school, one in middle school and one in elementary school. What we care most about is the quality of our kids education and the ability of those classroom educators to deliver that. So, I want to make sure that we focus on things like teacher training and teacher recruitment and teacher retention and teacher pay. The average Texas teacher is paid $10,000 less than the average U.S. teacher. So just to get to average, we’re $10,000 down right now, many of those teachers are working a second or third job to make ends meet when they have the most important job in front of them: The well-being and lifelong love of learning of those kids in their classrooms. So that's what parents are talking about in Texas. This witch hunt for books to burn out of the school libraries or distrusting history teachers on telling the full, complete and true story of Texas or national history — that might move some but what most really care about is the quality of education and the preparedness of these kids to graduate, to get post-secondary certification or degrees and then to be able to earn a living wage and fulfill their potential in their lives.

SEALES: When you talk about teacher training, do you support teachers having to go to in-house training about things like equity, oppression, privilege?

O'ROURKE: No, but I do want to make sure that we're giving teachers the best possible instruction and not just in undergraduate and graduate degree programs, but continuing opportunities to learn and improve. Most teachers that I listened to always want to get better. They enter this very difficult profession because they want to excel and I want to make sure they have the opportunities to do that and that we support them with the resources necessary. Again, I want to make sure that we're focused on the basics and on those kids who are in their care doing well and right now we're not getting that done in Texas. So, we got to get back to the important things and focusing on quality, world class, public education.

SEALES: Immigration is particularly salient where you live. Democratic turnout in 2020 did narrow the margin of Trump's win that year in Texas, but The New York Times visualize the swing of certain counties — left or right — and the biggest swings, the most radical swings were in heavily Hispanic areas right along the southern border and the central theme seemed to be immigration. Your plan in 2020 — I looked it up in the presidential race — you called for ending detention unless someone has a dangerous criminal record, essentially, catch and release. Have you changed your mind on that?

O'ROURKE: Well, to be clear, I'm opposed to family detention, I'm opposed to family separation and I am for following the rule of law on both sides of the border, which means that if you do not have a credible asylum request, if you're not lawfully coming to this country to apply for residency or ultimately citizenship, then you cannot enter. And if you enter without satisfying those conditions, there has to be consequences. On our side of the border, I want to make sure that we're following the law as well. So, when someone does have a legitimate asylum request that has to be heard and we have to respect that and we have to follow our laws. And then in addition, we've got to make sure, where our laws are not working — and whether you're a Republican or a Democrat — most of us in this country agree that our immigration system is not working today and we've got to change it and update it and upgrade it. And so, we've got to expect our current president and our current members of Congress to do that important job. We have not had a major revision to our immigration laws in this country since Ronald Reagan was president and it falls on so many these border communities, like the one I'm in right now in Laredo, to address this. So, listen to these communities. They've come up with the solutions and then let's work forward to implement them.

SEALES: Matthew McConaughey, the wild card, potential spoiler, I don't know a potential opponent of yours — I know I listened to you on the podcast, I think, and you said, you know, “Get in the race if you want to.” But he rejects vaccine mandates for young children, kids under 12 years old. Greg Abbott, he does too. Would you support vaccine mandates for kids under 12, once they're authorized?

O'ROURKE: Yes, vaccines work. It keeps people alive. We've lost 72,000 people in the state, so far, during the course of this pandemic and for a while we were the leader of the nation in childhood COVID deaths because our governor rejected the science and the best public health guidance and actually prevented school districts from requiring masks in the classroom. So, just as we require immunization and vaccines for a host of public health threats in our schools, I want to make sure that now that the science is in that we require those vaccinations for no other purpose than keeping our kids healthy and safe and alive going forward.

SEALES: Would you even go down to six months old? Because that's what they're planning in 2022.

O'ROURKE: I'm gonna let the science and the facts dictate this. So, once that information is in, once we can make an informed decision, let's do what's best for all concerned. But I'm someone who believes in the science and who has faith in the facts and wants to see more people protected in this state after losing so many tens of thousands of our fellow Texans. We've got to do better against this pandemic.

SEALES: Understood. I know you're very busy. I think we have 30 seconds with you, sir. Holiday plans? I mean, you announce this right before the holidays. Is your wife and kids? Are they okay with this?

O'ROURKE: You know, I'm actually gonna fly back to El Paso to be with my son on his 15th birthday and then hit the trail again and then come back for Thanksgiving. So, we're going to make it work. I'm blessed with a wonderful family who are all in on this with me. They see this as just as important an opportunity as I do to serve Texas. So, I'm very, very grateful for that.

SEALES: No rest for the weary. You guys know what you're in for and you're starting with a splash. Texas gubernatorial candidate and former Congressman, Beto O'Rourke. Good luck.

O'ROURKE: Thank you so much. Appreciate it.