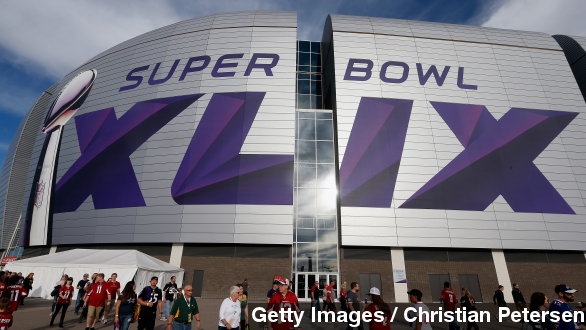 SMS
Bet's On: The Numbers Behind Super Bowl Betting
By Danny Matteson
By Danny Matteson
January 27, 2015
With billions of dollars in illegal gambling and dozens of ridiculous prop bets, a lot of money is swirling around the Super Bowl.
SHOW TRANSCRIPT

We'd make a healthy wager you're going to watch the Super Bowl, and a lot of other people are, too — some of them with a little money riding on the game.

According to a first-ever report from the American Gaming Association, Americans will illegally bet some $3.8 billion dollars — that's with a "B" — on the Super Bowl this year.

Add that to an average of around $100 million gambled legally, and you're looking at a grand total of nearly $4 billion wagered on the big game.

So, yeah. A lot of money going around. And so far, most of it is apparently going the way of the New England Patriots.

Which isn't terribly surprising. According to Vegas.com, the Patriots are currently a slim 1-point favorite over the Seahawks.

Those odds weren't always in the Patriots' favor, though.

As Business Insider reports, immediately after winning their respective conference championship games, Vegas had the Seahawks as a 2.5- to 3-point favorite over the Patriots.

Those initial odds quickly shifted and could have skewed how the betting will ultimately pan out. The Insider writes, "The usually smarter gamblers felt the opening line with the Seahawks favored was a terrible line and immediately put a ton of money on the Patriots."

Clearly, betting on one of the two teams can be tricky business. If that's not your thing, there are plenty of other wagers you can make.

Known as prop bets, Vegas offers odds on everything from what color Katy Perry's hair will be at the start of the halftime show to Bill Belichick's hoodie — sleeved or sleeveless, and what color? And our personal favorite: Which will be higher? Russell Wilson's passing yards or the average price of gas the day after the game? Very creative. (Video via Capitol Records / Katy Perry)