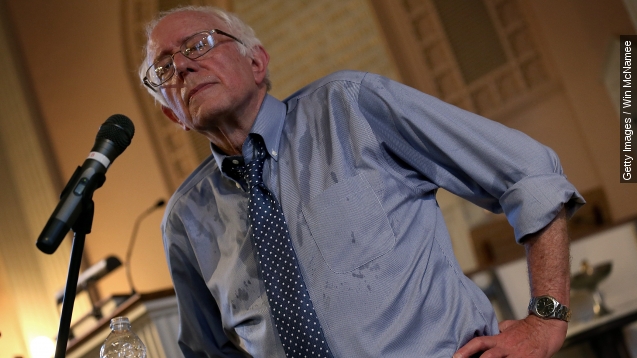 In the '70s, Democratic presidential candidate Bernie Sanders wrote this essay about sexual dynamics between men and women.

"That was 43 years ago. It was very poorly written. If you read it, what it was dealing with gender stereotypes," Sanders told NBC's 'Meet the Press.'

The piece has come back to haunt his campaign — with headlines referring to it as a "rape fantasy" or a "gang rape essay."

At best, it is an odd essay. The second paragraph reads, "A woman enjoys intercourse with her man — as she fantasizes being raped by 3 men simultaneously."

But calling it a "rape essay" is a bit of a stretch. The rest of the essay — again, written decades ago —  suggests women have a hard time balancing "gentleness" with "dependency" and "subservience." And while he now says he wouldn't write it again, this is how he described it to NBC Sunday:

Worth noting though that 'Fifty Shades Of Grey' has also been criticized for perpetuating rape culture.

The left-leaning news site Mother Jones re-surfaced the essay in an article examining Sanders' transition from a "young radical" in the 1970s to a "real politician."

Sanders is polling a distant second to Hillary Clinton, but his campaign hopes his populist message and his position to the left of the current frontrunner will resonate as the campaigns move ahead. (Video via YouTube / Bernie Sanders)

For his part, Sanders has likened the focus on the 40+-year-old essay to a campaign "soap opera."