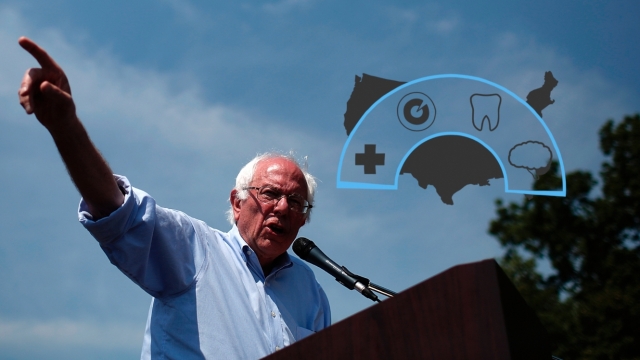 SMS
Bernie Sanders' 'Medicare For All' Health Care Plan, Explained
By Zach Toombs
By Zach Toombs
September 13, 2017
Also known as single-payer health care, the plan would expand the safety net for people over 65 to all Americans.
SHOW TRANSCRIPT

Fifty-eight percent of Americans support "Medicare for All." So, how does it work?

"Medicare for All," also known as single-payer health care, would break the link between employment and insurance and would expand the existing safety net for people over 65 to all Americans. That would cover the whole spectrum of care for every citizen, from primary to vision, oral and mental health. And instead of paying a premium to a for-profit insurance company, Americans would pay a tax. Employers would do the same thing through a payroll tax. These are average costs, and for most people, they represent big savings from our current system. But experts are at odds over whether the plan would pay for itself.

Now, a lot of people don't like the idea of government getting involved with their health care. But it turns out the people who are on government-run health care now really like it — more than people on for-profit insurance like theirs.

And developed countries with a government-run system spend a lot less per person than the U.S. does.

Despite majority support from the American public, until recently, Medicare for all was only supported in Congress by a handful of progressive Democrats. But more in the party have come around to the plan, which is now co-sponsored by a third of the Senate Democratic caucus.

Two leading voices on the plan are Sens. Sherrod Brown of Ohio and Bernie Sanders of Vermont, who's taking advantage of the chaos caused by Republicans' failed health reform to put forward a Medicare for All plan in the U.S. Senate.