Bernie Sanders Might Be Building Up His Resume For 2020 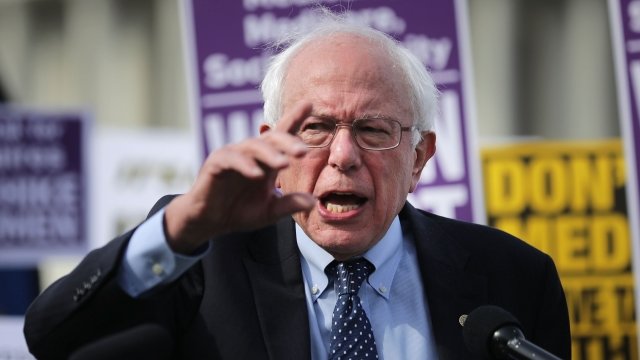 SMS
Bernie Sanders Might Be Building Up His Resume For 2020
By Eugene Daniels
By Eugene Daniels
November 27, 2017
We're years away, but people still want to know if Sanders will throw his hat in the ring again.
SHOW TRANSCRIPT

Is Bernie Sanders running in 2020 or not? No one really has the answer to that question, but that hasn't stopped speculation from running rampant. And the Vermont senator is fanning the flames by moving to shore up his presidential credentials.

If his 2016 primary challenge to Hillary Clinton proved anything, it was that he's a political powerhouse. His rallies were huge; his supporters were loud and loyal. And they still are. According to one survey, Sanders remains the most popular politician in the United States.

He's got a lot of political capital to spend, and so far he's mostly used it to garner more power and visibility as the Democrats fight President Donald Trump's agenda. Part of that fight is his role as the "outreach chairman" of the Democratic party, a position specifically made for him.

He is reticent to talk about his 2020 decision, and it would make sense for him to keep his options very open. And the party seems, at least for now, to want to keep him as its face, probably hoping his popularity will spread to other candidates next year and beyond.

"The party likes this huge movement he's built up over the last couple of years. They want to harness it for whoever wins in 2020. They also want to use his support for 2018 candidates," Lippman said.

Those other candidates are clearly cognizant of that power — just look at the number of mainstream Democrats that signed on to Sanders' "Medicare For All" bill in the Senate. Actual policy aside, supporting a dead-on-arrival Senate bill is a clear act of political calculation.

No matter what his decision on 2020 may be at this point, some of Sanders' new moves seem to be a recognition that he does have to play the "D.C. game" a bit more than he thought in order to be the face of the party, whether he's the nominee or not.

"He can't just be out on Planet Bernie. He needs to work within the system, the swamp a little bit. But he can still rail against it and try to use his influence and power to get millions of people to rally behind his issues," Lippman said.