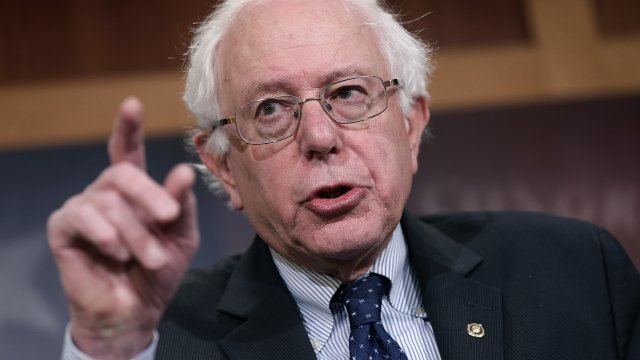 Sen. Bernie Sanders introduced the "Stop Bad Employers by Zeroing Out Subsidies Act," or the "Stop BEZOS Act," on Wednesday.

The bill, also introduced by Rep. Ro Khanna, is meant to keep large employers from underpaying their workers. It would tax companies with 500 or more employees for every dollar their employees receive in public assistance, effectively making the companies pay for their workers' benefits.

Sanders tweeted Tuesday: "Amazon is worth $1 TRILLION. Jeff Bezos is worth $155 BILLION. Thousands of Amazon workers have to rely on food stamps, Medicaid and public housing to survive. That is what a rigged economy looks like."

According to Forbes, Bezos actually has a net worth of over $163 billion. He's currently the richest person in the world.

Amazon said in a blog post that Sanders' statements are "inaccurate and misleading" and that "the average hourly wage for a full-time associate in our fulfillment centers, including cash, stock, and incentive bonuses, is over $15/hour."

Sanders also criticized Walmart, saying many of its workers rely on public assistance despite the Walton family being worth $175 billion.