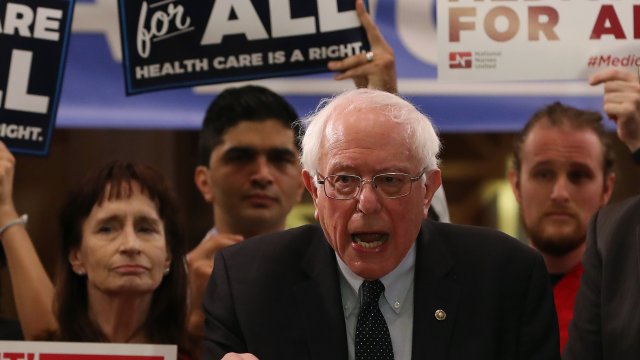 Sanders and 14 other Democratic senators introduced the Medicare for All Act of 2019 on Wednesday.

"The American people are increasingly clear: They want a health care system that guarantees health care to all Americans as a right," Sanders said.

Sen. Bernie Sanders has unveiled a new version of his "Medicare for All" plan.

On Wednesday, Sanders and 14 other Democratic senators introduced the Medicare for All Act of 2019.

He said in a statement the revamped legislation is meant to "guarantee health care to every American as a right, not a privilege."

The plan goes into a lot of detail about the type of health care coverage Americans would receive. But it doesn't elaborate on how much the system would cost or where the funding would come from — something many have criticized about the concept as a whole.

But in a separate document, Sanders suggested some ways to foot the bill, including a tax on extreme wealth, imposing a fee on large financial institutions and repealing what he called "corporate accounting gimmicks."