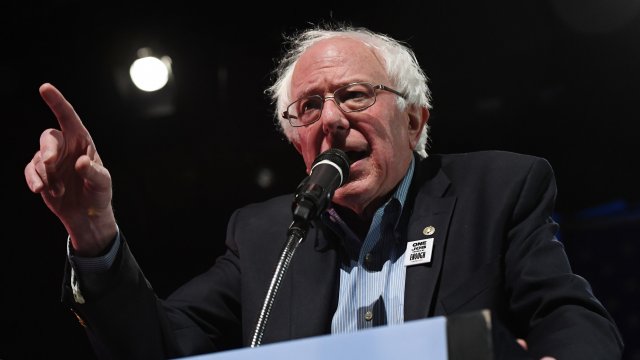 Bernie Sanders built a name for himself as one of the most surprising candidates during the 2016 presidential election. Now, he’s launched a 2020 bid with strong polling and record-breaking fundraising, but his nomination may face even more hurdles the second time around.

The sheer size of the competition is the first major obstacle for Sanders. In 2016, he had one opponent in the primary. Now the field is much larger, with younger and more diverse candidates like Kamala Harris and Cory Booker.

Rosenberg argues those candidates might be able to appeal to the younger voters who flocked to Sanders's 2016 campaign. And the diverse field may compound Sanders's struggles to connect to minority groups — he suffered lopsided losses to Hillary Clinton with black voters in 2016.

Several of Sanders's signature policies, like Medicare-for-All, free college tuition and increasing the federal minimum wage, have moved from radical ideas to mainstream proposals. That's a testament to his influence on the party — but it also makes it harder for Sanders to stand out from fellow candidates like Elizabeth Warren.

Sanders hasn't exactly been a team player with the Democratic party in the past — it took him over a month to endorse Clinton after she clinched the nomination, and his supporters continued to argue that the party establishment rigged the vote in her favor.

"There’s a lot of anger left over for Bernie and I think for a lot of people particularly after he ran as a Democrat to then immediately have left the Democratic Party again and became an independent I think was a little bit too much for many folks," Rosenberg said.

Still, Sanders's campaign enters the race in an enviable position. Recent polling shows the Vermont senator near the top of the pack in an increasingly crowded Democratic primary field. And within hours of announcing his candidacy, his campaign had already raised $1 million.