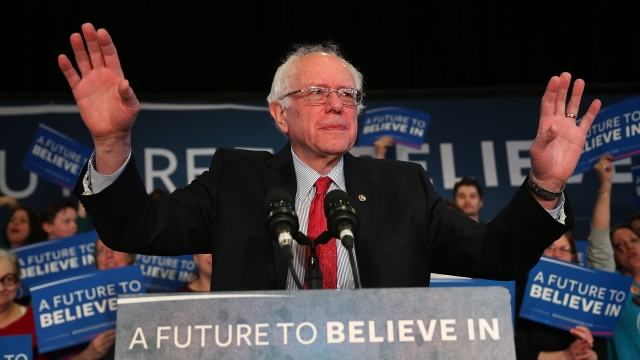 SMS
Bernie Sanders' Civil Rights Credentials Get Some Photographic Proof
By Eugene Daniels
By Eugene Daniels
February 20, 2016
In the past week, both a video and pictures of the Vermont senator's 1963 arrest have been released.
SHOW TRANSCRIPT

The question of whether or not Sen. Bernie Sanders was really arrested for a protest against segregation seems to have been answered.

This is a clip from an upcoming documentary about that boycott that appears to show Sanders being taken away after the 1963 protest in Chicago. And a Chicago Tribune article outlines what happened that day along with photos from its archives, showing the same thing as the video.

Sanders even identified his 21-year-old self, according to the campaign. A senior adviser said, "He looked at it — he actually has his student ID from the University of Chicago in his wallet — and he said, 'Yes, that indeed is (me).'"

Not only that, the Chicago Tribune says it found an archived story on the court cases, which include one for Bernard Sanders. The future senator was arrested for resisting arrest, found guilty and fined $25.

Sanders' involvement in the civil rights movement has become a big topic in recent weeks. And in the race to appeal to black voters, Clinton surrogates have even questioned Sanders' civil rights activism. Civil rights hero and Hillary Clinton supporter John Lewis said, "To be very frank, I never saw him. I never met him."

Both campaigns are seriously courting nonwhite voters, as voters in primary and caucus states become more racially diverse than in Iowa and New Hampshire.

And it makes sense, because African-Americans are overwhelmingly Democratic. According to Pew, 80 percent of blacks either leaned toward or were part of the Democratic Party in 2014.

This video includes images from Getty Images and clips from ABC, PBS, Bernie 2016 and Kartemquin Films.