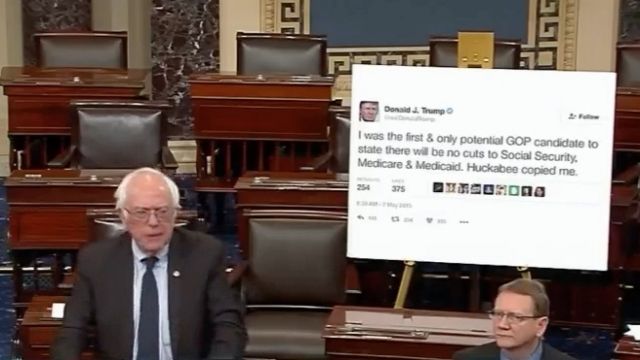 In the fight over Obamacare, Sen. Bernie Sanders is attempting to use President-elect Donald Trump's old tweets against him.

"And this is what Donald Trump said. And he didn't say it once in the middle of the night, he didn't say it in an interview. This was a central part of his campaign," Sanders said of Trump's promises to protect entitlement programs.

As the Senate debated the future of health care in the U.S., Sanders printed out a big poster board with one of Trump's tweets in which he said, "There will be no cuts to Social Security, Medicare & Medicaid."

Republicans are planning to repeal some or all of Obamacare. Sanders is also concerned they want to effectively end Medicare. Without those options, he says millions of senior citizens could struggle to pay for medical coverage.

Sanders called on Trump to hold true to that tweet he printed out and tell Republicans he will veto any proposed cuts to Medicare, Medicaid or Social Security.