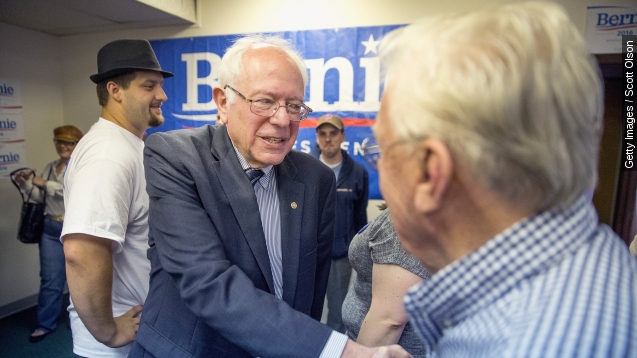 When the news broke that Sen. Bernie Sanders had moved within 12 percentage points of Hillary Rodham Clinton in the polls in New Hampshire, it prompted headlines like this one from The Hill. (Video YouTube / NorthStarOasis)

But that was actually the finding of just one online poll, and with a 6 percent margin of error at that. The same poll found Sanders trailing "Don't Know" in Iowa.

Sanders' modest gains are likely amplified by the fact that he's been labeled the "longest of long shots" and analysts haven't really given him much of a chance of seriously challenging Clinton.

And it seems the increasingly positive response his campaign is getting has surprised Sanders himself. (Video via Bernie 2016)

"Stunned, stunned. I mean, I had to fight my way to get into the room. Standing room only. Minneapolis was literally beyond belief," Sanders told NPR.

Some 5,000 people are estimated to have turned up for that rally.

Sanders has appealed to the Democratic Party's progressive wing, while observers have repeatedly categorized Clinton as a more moderate voice.

He's spoken in detail on a laundry list of issues. (Video via ABC)

"I can hear the Republican attack ads now: 'He wants America to look more like Scandinavia,'" George Stephanopoulos said.

Whereas Clinton has avoided talking about specifics.

And while critics have worked to label Clinton as aloof and even imperial, Sanders has largely avoided attacks from the crowded Republican presidential field. (Video via Rand Paul for President)

But if he's really going to close the gap, Sanders still has a lot of ground to make up: Recent polling has shown, on a national scale, Sanders' popularity has hovered in the 10-15 percent range, compared to Clinton, who's averaged in the upper 50s.