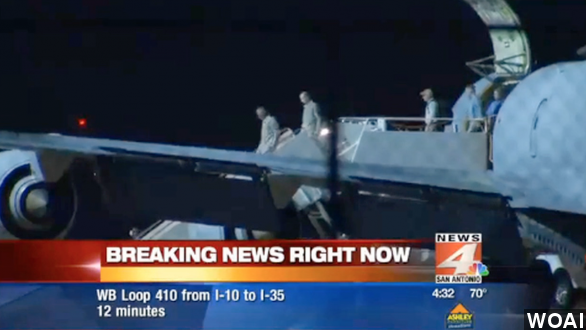 By Cliff Judy
June 13, 2014
As Sgt. Bowe Bergdahl arrives at an Army hospital in San Antonio, some experts say the military will try to take the politics out of his treatment.
SHOW TRANSCRIPT

One of the more controversial recent figures in the U.S. military is back on U.S. soil. Army Sgt. Bowe Bergdahl arrived in San Antonio overnight.

JENNA HILLAR, KSAT REPORTER: "We have been keeping watch all night. We've had a crew here all night watching for when Bergdahl would arrive."

MICHAEL GAROFALO, WOAI ANCHOR: "You're looking at video of an Air Force plane landing at Lackland at about 1:45 this morning. This plane is believed to have transferred Sgt. Bergdahl from a military hospital in Germany."

The Taliban's capture of Bergdahl in Afghanistan in 2009 ultimately led to the prisoner swap two weeks ago of five senior Taliban officials the U.S. held at Guantanamo Bay. (Via NBC)

The military is still investigating all of the circumstances surrounding Bergdahl's capture. Some of his former Army colleagues called him a deserter who walked away from his post in Afghanistan.

The deal to release Bergdahl amid questions of desertion and who the U.S. swapped to get him back has had the real pundits fuming and the fake ones sighing. (Via Fox News & Comedy Central)

JON STEWART, COMEDY CENTRAL'S THE DAILY SHOW ANCHOR: "This was supposed to be our moment."

But the care for Sgt. Bergdahl will be far less tongue-in-cheek. Several outlets in San Antonio report Brooke Army Medical Center has a team of doctors who've met every six months since Bergdahl's capture and ran drills on caring for him 10 times.

KIMBERLY FINNEY, CLINICAL PSYCHOLOGIST: "Smells, sounds, all of those basic senses are very easily activated in a way that can be alarming." (Via CBS)

Despite the controversy surrounding his release and return home, CNN's national security analyst says the military will be far more concerned on what happened to him and his mental state.

BOB BAER, CNN NATIONAL SECURITY ANALYST: "I think he's going to be turned over to professionals, and it's going to stay that way. I think the military is not going to let this become any more politicized than it has. It wants the answers quickly."

Local media outlets report Bergdahl's family is also in San Antonio, but it's unclear when the military will allow them to see the sergeant.