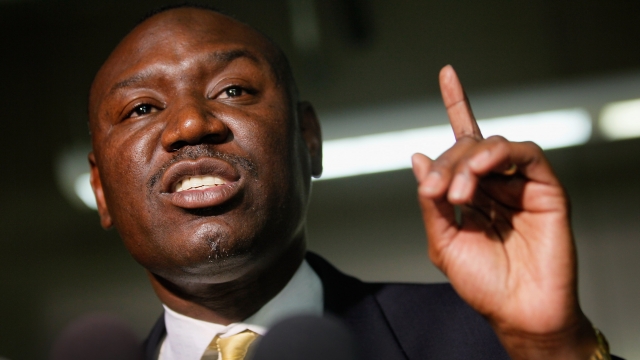 NEWSY'S JAMAL ANDRESS: "The name of this book is 'The Legalized Genocide of Colored People,' but you work in the law, that's the area you deal in. I'm wondering how you handle working in an area and depending on the law, and yet also arguing that it's set up against you."

BEN CRUMP: "Was it James Baldwin who said, 'To be black and conscious in America is to be always in a state of rage'?"

Ben Crump is arguably America's most well-known civil rights attorney, having represented the families of Michael Brown, Tamir Rice and, perhaps most notably, Trayvon Martin. Seven years after Martin's death and George Zimmerman's controversial acquittal, Crump says "Stand Your Ground" still promotes vigilante justice, leads to unnecessary violence and questionable claims of self-defense against people of color. And a growing body of research is beginning to back him up.

After Florida passed the first Stand Your Ground law in 2005, several states adopted some form of this legislation that counters two major principles of standard self-defense laws: First, it removes the duty to retreat, which says that a person facing harm or threat must retreat before responding with deadly force in self-defense. Second, it gives any law-abiding citizen the right to defend themselves anywhere they are legally permitted to be. While many states already allow you to respond to a threat with force if you're on your property,  known as the "castle doctrine", Stand Your Ground expands that to include just about any public place.

The RAND Corporation, a nonprofit, nonpartisan research organization, conducted a study on the effects of several gun laws in America and found "moderate evidence" that Stand Your Ground laws are associated with an increase in homicides. Since RAND published its report, four more studies have been released that make similar claims.

BAXLEY: "Well, we say figures lie and liars figure, because it's natural for us, even when we're trying to be objective, that our perspectives color the work."

Florida Sen. Dennis Baxley is skeptical of RAND's findings. He sponsored the bill that would eventually become Stand Your Ground, and he still believes it's good policy.

BAXLEY: "I would like to see numbers on how many homicides were avoided because somebody was willing to act. … So far, I am satisfied that we save far more lives of innocent people by having the presumptions that we have in law."

The RAND corporation concedes that a lot more research is needed, but also points out that none of their studies found a clear link between Stand Your Ground and less violent crime. And despite the accusations that Stand Your Ground disproportionately leads to people of color being victimized at the hands of racists, Baxley says he passed this law to help those that are disadvantaged.

BAXLEY: "They're people calling this racist. There's one race in my mind: the human race. And we all get to be a part of it. … What did you get a bunch of skinheads chasing down a black kid? He can stop that. He shouldn't have to suffer a beating or be killed. I did this for him."

But Stand Your Ground may not offer the same protections for all Floridians. A 2015 study shows convictions are more likely in cases with white victims versus non-white ones.

Being based in Florida, Crump continues to represent families fighting Stand Your Ground cases with some success. Most recently, he represented the family of Markeis McGlockton, a black man who was shot and killed by a white man outside of a convenience store after an altercation over a parking space in Clearwater, Florida.

McGlockton's killer, Michael Drejka, was initially not arrested because of the Stand Your Ground law, but after a video of the shooting was released showing McGlockton turning away from the shooter, Crump pressured the DA to press charges against Drejka. He was arrested and eventually convicted of manslaughter.

CRUMP: "It's important that the world see how they are killing us. But not just in these high-profile police shooting cases, but more poignantly how they're killing us in the courtrooms with the law that is supposed to protect us. They're using it as the very instrument to kill us."

Backlash to Stand Your Ground cases has led to a decrease in the number of states carrying the law. In 2013, 33 states had Stand Your Ground laws on the books. Since then, at least 10 of those states have repealed or reformed the law.  But some states, like Utah and Indiana, have actually taken measures to expand and strengthen Stand Your Ground.