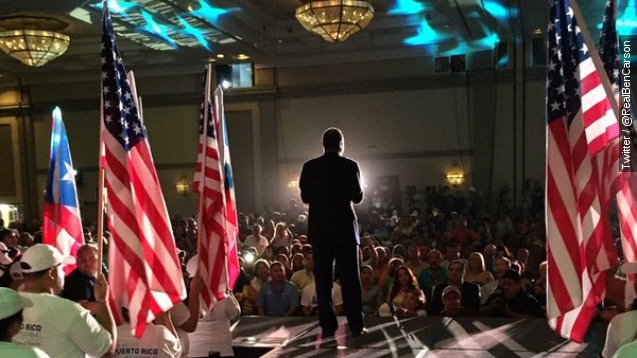 Sunday, Republican presidential candidate Ben Carson announced his support for a star being added to the American flag.

"And I would be incredibly honored and delighted for Puerto Rico to be the 51st state," Carson said. (Video via NBC)

Carson reportedly traveled to the island to speak at a statehood advocacy group convention. At the event he said, "My campaign is built around the premise of 'We the People,' and through such lens, I view the statehood question in Puerto Rico as settled."

He added the rest of the U.S. would be better protected if the commonwealth became a state, given the island's strategic location.

Puerto Ricans can vote in presidential primaries but not in general elections. There are also roughly a million Puerto Ricans in Florida –– historically a swing state.

Jeb Bush and Marco Rubio, both of whom are from Florida, have advocated for Puerto Rican statehood longer than Carson.

Yet one obstacle to Puerto Rican statehood is its current $72 billion debt and 45 percent poverty rate.

Hillary Clinton and Bush have both argued for allowing the commonwealth to file for Chapter 9 bankruptcy. Rubio opposes the measure.

Carson appears to have yet to take a stance on the bankruptcy issue. The latest Real Clear Politics average of polls puts Carson at second among most popular Republican candidates, within a percentage point of Donald Trump. (Video via Carson America, Inc.)