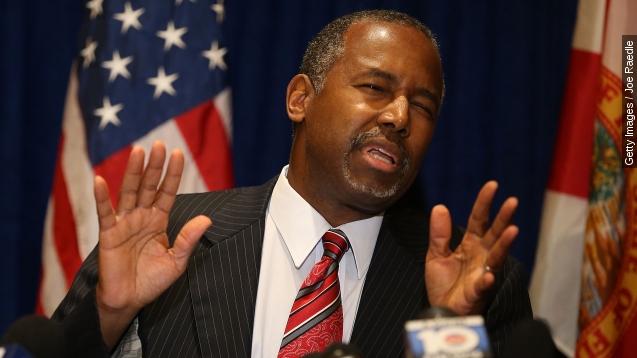 SMS
Ben Carson Learns Front-Runners Face A New Level Of Scrutiny
By Eugene Daniels
By Eugene Daniels
November 6, 2015
Being a presidential frontrunner is great but it comes with even more scrutiny than any other candidate.
SHOW TRANSCRIPT

"Our polls now have Carson vaulting over Donald Trump," NBC reported this week.

It definitely started out at a high point. On Monday, an NBC/Wall Street Journal poll had Carson leading the crowded pack of Republican presidential candidates with 29 percent. According to NBC, that's the highest percentage any GOP candidate has reached in its polling this year. (Video via NBC)

And a Gallup poll found Carson is the best-liked of all presidential candidates, including those from across the aisle. And that's despite not having great name recognition until recently — something that is really important this early in the presidential primary season. (Video via Carson America)

But then Carson found out the hard way that being a front runner comes with its own special brand of scrutiny.

"Carson is facing new backlash over questions about his past," CNN reported Friday.

Carson's being questioned about stories he's touted in interviews and books as proof of his inspirational rise from troubled teen to neurosurgeon to presidential contender — starting with what he says is his violent past. (Video via Carson America)

"My mother was trying to get me to wear something I didn't want to wear, picked up a hammer. Fortunately, my brother grabbed it from behind," Carson said in September.

CNN says it spoke with nine people who grew up with Carson and reported none of them could corroborate the candidate's stories of childhood violence. The Carson campaign has shrugged off the reporting as a "bunch of lies." (Video via CNN)

And then came the topic of Carson's supposed West Point scholarship offer.

"Politico today reported that there were questions about Dr. Ben Carson's claim of having been offered a scholarship from the U.S. Military Academy at West Point," Chris Matthews of MSNBC said.

Carson admits there was no such formal offer, telling The New York Times, “It was, you know, an informal ‘with a record like yours we could easily get you a scholarship to West Point,'" and said he should've clarified his statements.

Whether the claims against Carson all shake out, he's learning something not every candidate can understand. Being at the top of the heap can increase your chances of becoming president — and it most definitely increases the chances of having a target on your back. (Video via Carson America)