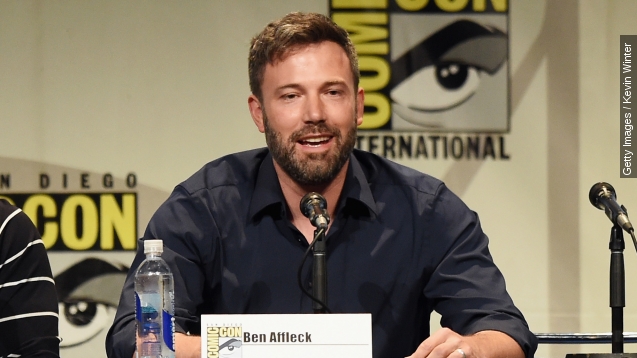 Warner Bros.' panel at Comic-Con on Saturday was met with huge anticipation, largely because the "Batman v Superman" cast would be appearing.

"Twenty years in Gotham, how many good guys are left? How many stayed that way?" Ben Affleck asked.

Most surprising about the panel was Ben Affleck addressing how he avoided psyching himself out stepping into the franchise character's cape and cowl.

"I think if I thought too hard about the actors who played this part before, I couldn't have taken the job," Affleck said.

But Affleck joked he was reassured when director Zack Snyder said Affleck was perfect for the role because Batman was "at the end of his rope; he's older, he's a burnout." (Video via Warner Bros.)

"At the end of it I was astonished to look at it and go, 'That's exactly what you pitched me,'" the actor told the crowd.

Affleck also told the audience about his run-in at a Halloween costume shop with former Batman actor Christian Bale.

They were standing in the Batman costume aisle because Affleck's son "wisely" wanted to dress as the superhero for Halloween.

Affleck used the moment to ask Bale for a few pointers about playing the Caped Crusader. Bale's advice? Make sure you have a way to go to the bathroom while wearing the suit. Helpful. (Video via Warner Bros.)