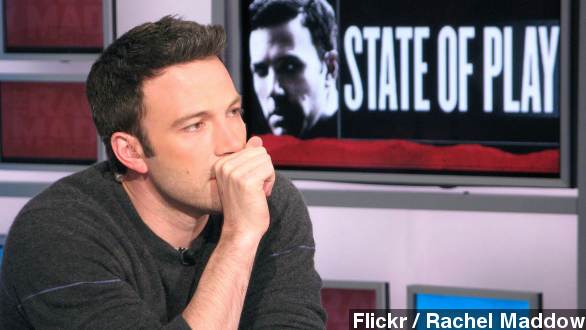 SMS
Ben Affleck Asked To Leave Vegas Casino For Counting Cards
By Collin Ruane
By Collin Ruane
May 3, 2014
Security at the Hard Rock in Las Vegas asked the actor to leave after suspecting him of counting cards at the blackjack table.
SHOW TRANSCRIPT

Ben Affleck might have to find a new place to play blackjack. Reports say the actor was kicked out of a Las Vegas casino for counting cards.

According to TMZ, Affleck is banned for life from playing blackjack at the Hard Rock Casino after security determined he had been counting cards, which technically isn't illegal in Nevada but is frowned upon.

Counting cards is a technique used to keep track of what cards have been drawn in order to see how risky their next bets could be. The technique has been showcased in movies like "21." (Via Columbia Pictures / '21' )

And according to sources at the Hard Rock Casino, that's exactly what got Affleck in trouble earlier this week.

CNN notes one security official at the casino told Affleck, "You are too good at the game," just as he was asked to leave.

A source tells Us Weekly the casino's security was actually very nice to Affleck and did allow him to play other games. The actor won't be banned from the whole casino in the future, just from the blackjack tables.

But he hasn't always been so lucky. Radar Online reports Affleck also lost $400,000 in a poker ring that included movie mogul Ron Meyer.

So far, the Hard Rock Casino hasn't publicly commented on the incident. TMZ reports Affleck was in town with his wife, Jennifer Garner, as part of a getaway before he starts filming the new Batman movie.