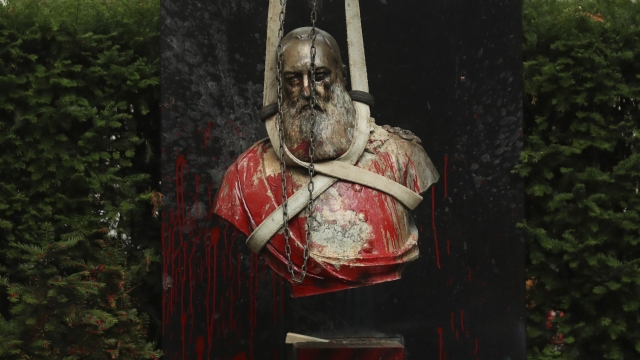 SMS
Belgium Confronts Its Colonial Past In The Wake Of Floyd's Death
By Ben Schamisso
By Ben Schamisso
July 2, 2020
Global conversations around racism have brought new intensity to the nation's grappling with its brutal legacy in central Africa.
SHOW TRANSCRIPT

The global protests for racial equity triggered by George Floyd's killing have prompted many European countries to reassess how they view their colonial past.

In Belgium, which colonized Congo for decades, calls are growing to remove all statues of King Leopold II and change street names bearing his name. The former ruler is blamed for the death and mutilation of millions of people there in the late 19th century.

"Having statues in public space that are of a person that has murdered over 10 to 15 million people, it's already showing how we glorify, how we normalize racism in the Belgian context. And it means that these Black lives of Congolese people here don't matter," said Stephanie Collingwoode Williams, a spokesperson for Belgian Network For Black Lives.

For more than 20 years, Leopold ruled Congo as his own property, forcing many of its people into slavery to extract resources for his personal gain. In 1908, the king handed the country over to the Belgian state, which continued to rule over a nation 75 times its size until Congo gained independence in 1960.

"And still today, companies in Belgium still have the advantages of colonialism, banks made a fortune," said Wouter Van Bellingen, a former Belgian politician and director of a nonprofit that fights again discrimination.

Tuesday marked the 60th anniversary of the Democratic Republic of Congo's independence from Belgium. In a letter to the DRC president, Belgium's current king expressed his "deepest regrets" for the "acts of violence and cruelty" the former colonial power inflicted on the Congolese people. The letter stopped short of an outright apology but was the first acknowledgment by a reigning king of the brutal actions of the past.

"All the minerals of the Congo and Burundi were all sold under the market price to get wealth in Belgium. But people don't want to know. 'Yes, look, it's not me, it's my grandparents,'" said Van Bellingen.

Belgium has long grappled with its legacy in Africa. For decades, the country taught students it had brought "civilization" to Congo.

But global conversations around racism in the wake of Floyd's death have brought new urgency to the issue. Last month, regional authorities in Belgium promised classroom reforms to start teaching the true character of colonialism.

"The curriculum also has to be given by people of color themselves," said Collingwoode Williams.

"There, where decisions are made, people of color, people of African descent, are not there," said Van Bellingen.

Van Bellingen and Stephanie Collingwoode Williams say the nation is moving in the right direction. But they also want Belgium to root out institutionalized racism and discrimination against people of color.

"It's about how we fight this together and how we make it better for not only ourselves, but future generations," said Collingwoode Williams.

"We can include everybody in the labor market and also make something more inclusive and prosperous for everybody. That's my dream. And believe it. I really believe it's going to happen," Van Bellingen said.