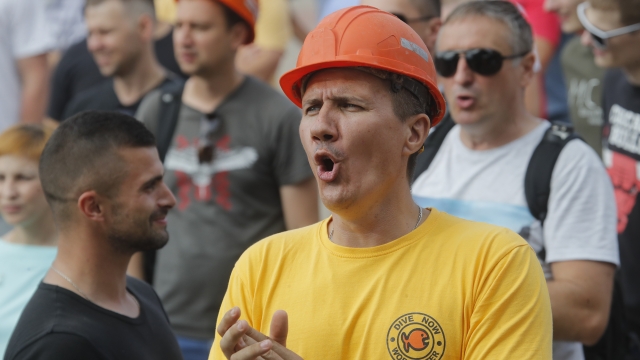 SMS
Belarus President To Protesters: No New Elections 'Until You Kill Me'
By Peter Hecht
By Peter Hecht
August 18, 2020
Demonstrators charge that Alexander Lukashenko rigged vote to sweep to a sixth presidential term.
SHOW TRANSCRIPT

Belarus' strongman president is telling pro-democracy demonstrators there will be no new elections in his country "until you kill me."

Those defiant words from Alexander Lukashenko come as protests intensify against his rule. Demonstrators are demanding he resign over alleged vote rigging in the August 9 presidential election.

They are charging that Lukashenko manipulated the ballot count to sweep to a sixth term in an apparent landslide.

No international observers were allowed in for the election. Human rights groups say thousands of protesters have since been detained in ensuing protests against Lukashenko's continued rule.

The Belarus military has been conducting exercises, while Russia says it's ready to step in with its military to help Lukashenko. Belarus shares borders with several NATO countries and is viewed by Russia as a strategic buffer against the western alliance.