Being In Space Is No Excuse To Miss The London Marathon 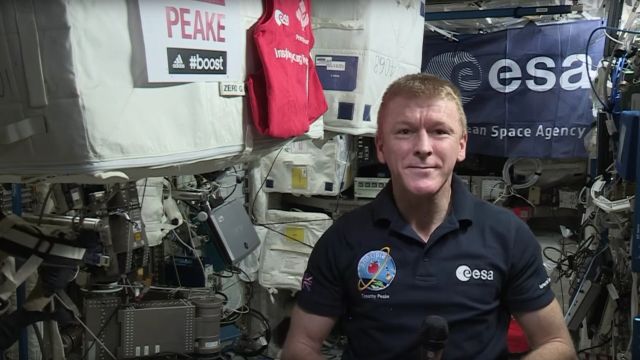 Just because you're in space doesn't mean you have to miss a marathon. Just ask astronaut Tim Peake. Sunday, the British national ran the London Marathon from the International Space Station.

Or rather, he ran the equivalent distance on a special space treadmill.

Peake showed off some of that equipment during an interview with British journalists before the big race.

"It's not very comfortable to run in," said Peake, a European Space Agency astronaut. "It's like running with a clumsy rucksack on. It tugs and pulls in different directions."

Running in space is pretty common — astronauts have to exercise a lot to keep up bone density and muscle mass in zero gravity — but Peake is only the second astronaut to run a marathon in space. The first was Sunita Williams in 2007.

Peake beat her time by a little less than an hour and claimed the world record for fastest marathon in space.

This time, he finished in about 3 hours and 35 minutes. He may have been a bit slower, but according to the BBC, since he was on the ISS, he technically covered more than 53,000 miles during his run.

This video includes images from Getty Images and clips from NASA and the European Space Agency.

Correction: An earlier version of this video incorrectly identified astronaut Karen Nyberg as astronaut Sunita Williams. The video has been updated.