Beijing Is Starting To Sound Tough On Hong Kong's Protests 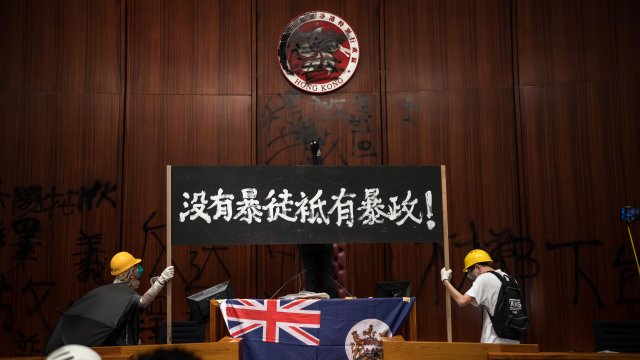 China's central government is taking a tougher stance on protests in Hong Kong.

China is toughening up its rhetoric on Hong Kong's chaotic protests after a group of demonstrators stormed the city's legislature.

China's Foreign Ministry spokesman Geng Shuang said the protests were "a serious illegal act that tramples the rule of law in Hong Kong and undermines social order." A separate op-ed in the state-run Global Times said, "Chinese society is all too aware that a zero-tolerance policy is the only remedy for such destructive behavior witnessed."

The harsh rhetoric is a shift in posture from Beijing. The central government has mostly stayed away from the more peaceful demonstrations since they began on June 9.  Instead, China has blamed interference from other countries for the movement against Beijing's increasing influence over the semi-autonomous city.

Hong Kong's police responded to initial demonstrations back in June with force, but didn't prevent protesters from breaking into the legislature building during recent protests. Some of Hong Kong's pro-democracy legislators fear the central government and Hong Kong's Chief Executive Carrie Lam might be trying to build sympathy for a broader crackdown on the demonstrations.

Hong Kong lawmaker Claudia Mo told reporters, "That's exactly what Carrie Lam's trying to do, turning the tables around, shifting the public anger, if you like on the offenders, on the young protesters instead. But the problems they raised have been so deeply-rooted in Hong Kong. I should think the majority can still see through this political façade of Carrie Lam's."