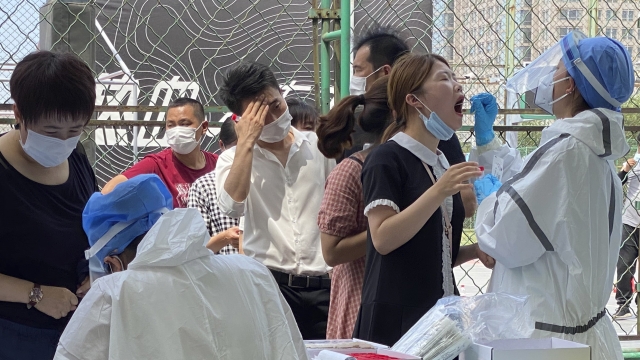 SMS
Beijing Goes Into Lockdown Over New COVID-19 Outbreak
By Meg Hilling
By Meg Hilling
June 16, 2020
More than 100 new cases of the illness have been detected in the city in the last five days.
SHOW TRANSCRIPT

Officials in China are putting neighborhoods in Beijing under lockdown in response to a new COVID-19 outbreak.

More than 100 new cases of the illness have been identified over the last five days, prompting health officials to set up testing sites and security checkpoints, and close schools. An official in Beijing said the city is in "wartime emergency mode" in response to this new outbreak.

The new cases are being linked to a wholesale food market in the city, however it is unclear if the virus is being spread by the food or packaging of the food.

The BBC reports that health officials say the virus strain being found in Beijing does not appear to resemble the strain circulating throughout the rest of the country. As a result, the World Health Organization is calling for China to share the genetic sequence of the new strain.