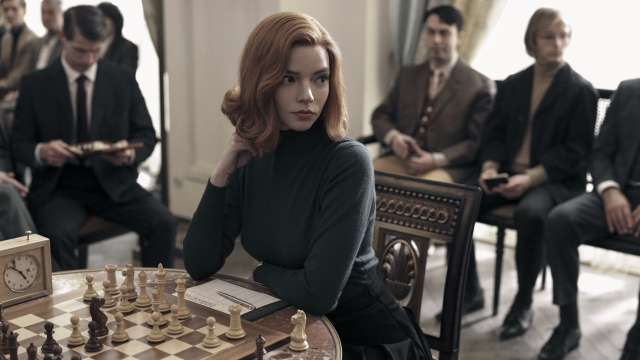 SMS
Behind The (Virtual) Scenes Of Netflix's 'The Queen's Gambit'
By Casey Mendoza
By Casey Mendoza
October 30, 2020
The VFX team had to really learn chess in order to develop the effects for the miniseries.
SHOW TRANSCRIPT

Telling the story of a chess prodigy and her struggles to become the greatest player in the world, "The Queen's Gambit" has been praised for its exceptionally accurate depictions of the game.

Take, for example, this scene.

John Mangia, visual effects supervisor for Chicken Bone VFX: "It's all real chess that you're seeing. It's all based on real games or real moves or real countermoves to moves. It's all very meticulously planned and scrutinized."

Those floating chess pieces were all designed by Chicken Bone VFX — the team that also worked on "Westworld" and "The Walking Dead."

John Mangia, the show's visual effects supervisor, told Newsy that every project comes with new challenges, but "The Queen's Gambit" came with its own very specific learning curve.

Mangia: "We had to really learn chess. I mean, fortunately, the show had these amazingly talented, brilliant chess advisers who we had to help us out. But we had to be able to translate chess notation — which is written in a very funny, cryptic way — into animated moving pieces that were accurate."

Beyond the virtual chess pieces, Chicken Bone also re-created 1960s Paris, Mexico City and Moscow. That's right: All of those backgrounds are virtual, too.

John Renzulli, founder and CEO of Chicken Bone VFX: "The show, in large part, the post part of the show, was almost completely kind of in the context of the pandemic. … We didn't miss a beat."

Despite the production shutdowns faced by other projects at the beginning of the pandemic, the post-production on "The Queen's Gambit" was able to continue working toward its fall release. The critically acclaimed miniseries debuted on Netflix earlier in October, and it currently boasts a 100% rating on Rotten Tomatoes.