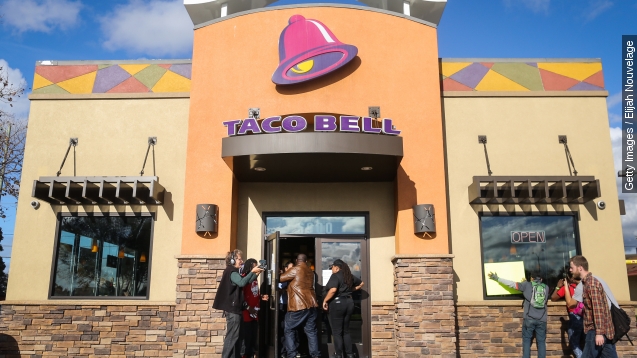 You can soon have your cheesy gordita crunch with a good ol' side of booze — if you live in Chicago.

At a Taco Bell location set to open in Wicker Park later this year, the chain will offer wine, beer and alcoholic freezes.

But as Time was quick to point out, in its very first sentence ... "to-go cups are not an option." 'Cause nobody wants to be drinking and driving. No bueno.

The booze will be served in a separate cup, too, so you can't order it and then sneak on out the door.

A writer for the Chicago Tribune is pretty excited, writing: "No word yet on the hours alcohol will be served, but fingers crossed for a Sunday morning mimosa-biscuit taco special."

We could get on-board the mimosa train.

Although as one clever Twitter user pointed out ... most people were already on said train and then ride it into Taco Bell.

"I thought the business model is based on people already drinking a lot before going to The Bell.

But Taco Bell isn't alone in its quest to provide patrons with some liquid goodness.

In 2012, a White Castle in Indiana started selling wine. And Sonic has a location in Florida that serves up the bubbly, too. Burger King has dabbled with booze too, opening  a Whopper Bar in downtown Kansas City. It no longer sells alcohol.

The chain has been working hard to change its image. It launched an app with mobile ordering.

And has pretty clearly gone after McDonald's in the breakfast wars.

And it's removing all artificial flavors and colors by the end of the year.