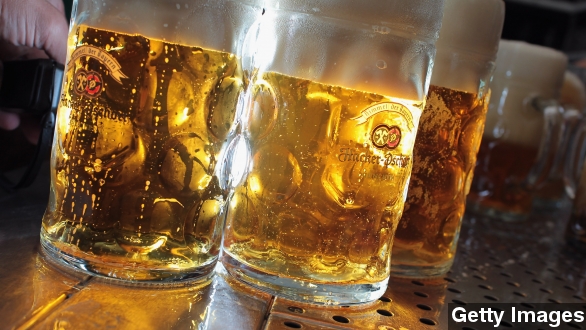 In some not-so-shocking news, the World Cup was great for beer sales, especially in the homeland of the winning team. (Via Getty Images)

According to a report released Thursday by Anheuser-Busch InBev, a surge of beer-drinking during the World Cup boosted sales significantly — especially in Germany. (Via The Wall Street Journal)

Now, it's no secret Germans are already among the biggest beer drinkers in the world.

But as the country's soccer team made its way to that championship game, the brews flowed even more freely than usual. (Via Euronews)

Quartz cites data released by Germany's statistics agency, which says beer sales jumped by 14 percent in June. That jump shot sales in the second quarter up more than 5 percent compared to last year, which is the strongest growth recorded in years.

And July's beer sale numbers have yet to be released, but analysts say they could be even more impressive than June's. (Via Getty Images)

But rising beer sales during major sporting events isn't too shocking of a trend.

As SB Nation pointed out in an extensive piece back in 2013, beer has become an integral part of the sport fan's lifestyle for hundreds of years.

And venues around the world have taken advantage of that fact recently, offering alcohol alongside snacks and souvenirs to rake in even more revenue. (Via KXAN)

Even some colleges in the U.S. have joined the trend. (Via The University of Texas at Austin)

But for events like the playoffs and championship games for many major professional sports leagues, fans don't have to be in a venue to consume a lot of beer.

According to Sporting News, nearly 50 million cases of beer were sold overall during the 2013 Super Bowl.

And as The Street points out, March Madness gives a significant bump to March beer sales. Between December and February, beer production in the U.S. usually falls between 14 and 15 million barrels. But it makes a jump in March to 17 to 18 million barrels.

As for the 2014 World Cup, other regions saw a rise in beer sales as well, including Mexico, Brazil and Australia. Bottoms up, indeed!