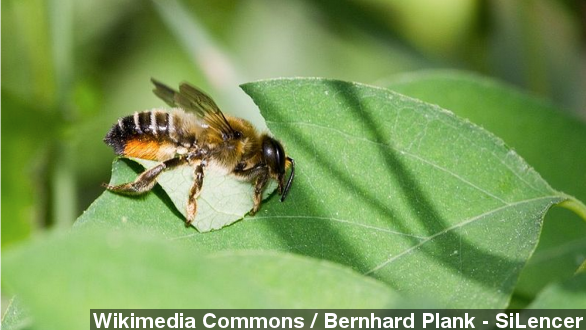 By Katherine Biek
April 12, 2014
Archeologists have found many fossils in the La Brea Tar Pits, including those of saber-tooth tigers and mammoths.
SHOW TRANSCRIPT

Fossils of a rare kind of leafcutter bee's nests was discovered in the tar pits in the 1970s. (Via Wikimedia Commons / Bob Peterson)

Science World Report says researchers used a micro-CT scanner to analyze the physical features of the bee pupae, which is the stage when larva turn into an adult bee, as well as the architecture of the fossilized nests.

Nature World News says researchers determined the bees found in those nests are actually related to a species of bee still living today and that the prehistoric bees "lived in a moderately moist environment that occured at a lower elevation during the Late Pleistocene."

Live Science reports researchers concluded that the mother bee purposely planted her babies in the ground--as is common with the leafcutter bee. Because the nest was planted near an asphalt pipe, it became trapped in the tar.

In the study, which was published in the scientific journal PLOS ONE, researchers say they studied the leafcutter fossils because "these specimens frequently serve as the most valuable paleoenvironmental indicators due to their narrow climate restrictions and life cycles."

It's important to note that the U.S. Department of Agriculture concluded one-third of bee populations have died out over the last seven years. Beekeepers and biologists have not been able to come to a solid conclusion as to why, though.

The researchers plan to continue studying the bee fossils, hoping information gained about the past environment will provide insight into what the climate will be like in the future.