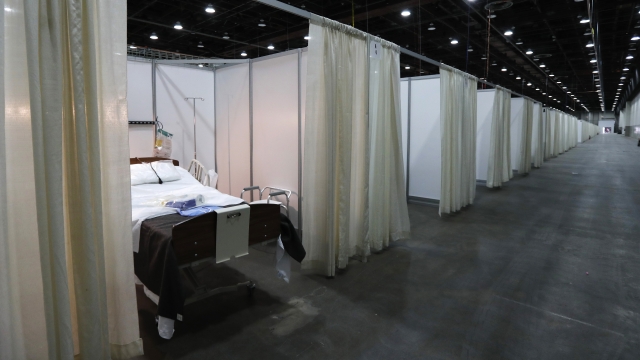 A severe case of shingles sent Tracey Fine to a Wisconsin emergency room just before Thanksgiving.

The hospital was so overloaded with Covid patients that Fine says she spent 13 hours on a gurney in a hallway waiting for a bed.

"I was just in excruciating pain," she said. "The nurses kept telling me it’s just crazy in here. We’re just slammed."

Low hospital capacity brought on by the virus led doctors and nurses to take out a two-page newspaper ad, an open letter to the people of Wisconsin warning, "...without immediate change, our hospitals will be too full."

Yet there are hundreds of empty beds at Wisconsin’s makeshift alternative care facility in Milwaukee, re-opened in mid-October for overflow coronavirus cases.

It is supposed to free up hospitals for patients like Tracey Fine.

"This is not just about if you need hospitalization for COVID," said Julie Willems Van Dijk, deputy secretary for the Wisconsin Department of Health Services, as she announced the site’s activation on Oct. 14. "This is about crowding out our hospitals for every other type of care any one of us could need."

Almost two months later, with the strain on hospitals only growing, just seven patients are at the field hospital that has space for 530.

A department spokeswoman says patients have to be stable enough to make the move, and they have to agree to the transfer.

Getting patients to go to the alternative care site is not an easy sell, said Dr. Jeff Pothof, emergency room doctor and chief quality officer at University of Wisconsin Health.

"They say, you know, thank you but no thank you," Pothof said. "I think part of that is they think this is like the TV show M*A*S*H with like tents flapping in the wind and Jeeps driving around. It’s really not. It’s a great facility."

Newsy examined a list of 38 temporary clinics built by the U.S. Army Corps of Engineers in spring.

Many of the biggest locations are closed now, with no plans to reopen, even as a post-holiday wave of infection stretches hospitals to the limit.

Local authorities in Chicago, Detroit, New York and Washington have said their overflow centers are mothballed because hospitals can still handle demand for now.

"We have the ability if we need to go and fire up a field hospital," Illinois Gov. J.B. Pritzker said during an Oct. 26 news conference.

The Army Corps built one of the largest clinics in Denver, with 2,000-beds.

It also is vacant.

A state official said hospitals still have bed space, and the priority now is to fill extra staffing needs.

As Tracey Fine learned, even when a state activates a makeshift care center, it may stay unused while hospitals remain overwhelmed.

"It’s really scary to be that sick and to feel like your health care providers are too distracted to give you the care that you need," she said.