Bear Cameras In America's National Parks Are Surging In Popularity 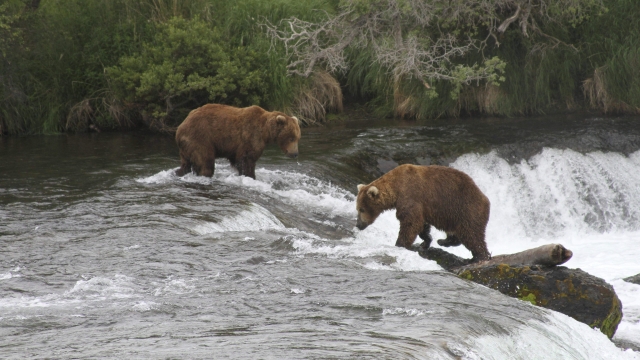 SMS
Bear Cameras In America's National Parks Are Surging In Popularity
By Sam Eaton
By Sam Eaton
July 14, 2022
Bears cameras at Alaska's Katmai National Park give an intimate glimpse into the natural world, and they're rising in views.

Few are lucky — or brave — enough to visit brown or grizzly bears in the wild. But as Mike Fitz says, you don’t have to leave your desk to get an intimate glimpse of these animals in one of America’s most remote national parks.

"This is live footage from Brooks River in Katmai National Park, Alaska, and it's one of the best places in the world to watch brown bears fishing for salmon," Fitz said.

Fitz is the resident naturalist with explore.org, which partnered with the National Park Service a decade ago to live-stream the bears’ annual summer feast on sockeye salmon at Brooks Falls.

"So they're gathered at the waterfall right now trying to get, really, their first good meals of the year after a long winter of hibernation,"  "So they're hungry right now. There's a lot of competition going on for the best fishing spots, and it's also sort of, like, the end of the mating season, as well. So a lot of interesting bear activity to see on the cameras right now."

This may help explain the bear cam’s surging popularity. Last year, more than 16 million people logged on to the live cams to watch the brown bears. That’s compared to the several thousand who were lucky enough to visit the park in person.

"These places aren't accessible to everybody, whether you live, you know, in the middle of a big city, and maybe it's just hard to get out and see a wild place, or maybe you don't, like I've mentioned before, you don't have the money or the time or there's some sort of physical limitation," Fitz said. "But I, through the webcams, I've seen people's lives really changed, and sort of, like, their whole perspective on nature shift."

That’s exactly what happened to Naomi Boak, a former television producer living in the Bronx when she first discovered the live cams back in 2014.

"I was pretty sick and somehow, somehow, I found the bear cams, and I saw this big Buddha-like bear sitting on a rock by the falls in kind of a position that made me think of Rodin’s Thinker, and I became addicted," Boak said.

NEWSY'S SAM EATON: How did it impact your life? I mean, the decisions you made going forward, how did that change your personal journey?

NAOMI BOAK: In 2019, I saw on Katmai Conservancy's Facebook page that the park was looking for a media ranger, and I thought, "Oh my god, that's perfect."

Ten days later, Boak was in Alaska doing a three-season stint watching over the same bears she had come to know so well when she was sick.

"When I started to see bears that I recognized — because you recognize them as individuals and you follow their stories, their soap operas — I was completely a fan girl, and I was so grateful," Boak said.

She says now, back in Massachusetts, she still watches religiously as a way to filter out the steady stream of bad news.

"It calms you down," Boak said. "It takes you out of yourself into a world that you don't need control over. You let that world happen. You become a part of it, and that story envelops you and heals you."

British environmentalist Tony Juniper, the chair of Natural England, has written extensively on humanity’s relationship with animals. He says restoring people’s connection to the natural world, even through webcams, is essential if we’re going to stave off the dual crises of climate change and biodiversity loss.

"It's not a one-way street," Juniper said. "The more we can connect people with the natural world, not only do we get that benefit in terms of people's health and wellbeing, but also that's how we generate, over time, the mandate to save it. Because once people value something, of course they have a very different relationship with it."

This is a relationship Fitz has tapped into to educate millions of people about the larger ecosystem that supports Katmai’s 2,000 brown bears and the last great sockeye salmon run on Earth. Then there are the bears themselves, with names like Otis, Lefty and Grazer. Their unique personalities and dramas unfold in real time like a bear reality show.

"I love to watch the hierarchy of the bears at the waterfall, among the adult males," Fitz said. "Each year that hierarchy sort of shifts and ebbs and flows depending on who feels the strongest really in the moment. So yeah, there's a lot of the storylines that I'm looking forward to following and everyone else can follow on the webcams too."

It's all culminating with “Fat Bear Week” in early October, when fans have the chance to vote on which bear put on the most pounds ahead the long winter hibernation.