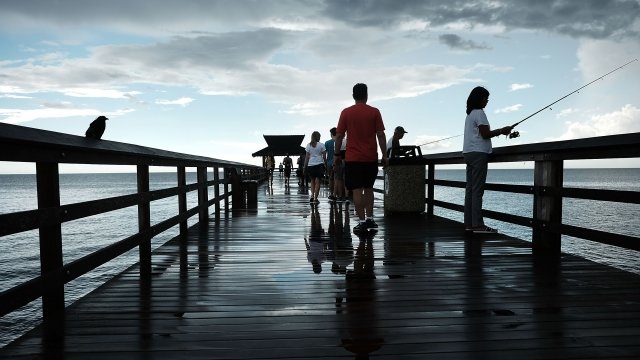 By Andrea Gonzales
October 5, 2018
The toxic algae is naturally occurring, and believed to be fueled by pollution. It has killed thousands of fish and other marine life.
SHOW TRANSCRIPT

The red tide bloom is making its way up Florida's east coast, and popular beaches are struggling to deal with it.

Palm Beach County announced its beaches were open Friday and it will continue testing the water. Miami-Dade County opened its beaches Friday with a warning that people with respiratory issues like asthma to avoid red tide areas.

The toxic algae is naturally occurring, and believed to be fueled by pollution. It has killed thousands of fish and other marine life.

And it doesn't stop at harming wildlife. Newsy previously reported prolonged exposure to the algae is dangerous to humans. It can aggravate the lungs and cause rashes, or worse. One study found people living near harmful algae blooms were more likely to die from non-alcoholic liver disease. Other studies have shown links to its exposure and ALS, also known as Lou Gehrig's disease.

Doctors in the state told NBC News they were seeing more people with breathing problems during this bloom.

Florida's Senators, Marco Rubio and Bill Nelson, proposed a bill in August to help clean up the algae blooms. It was signed into law as part of a larger spending bill.