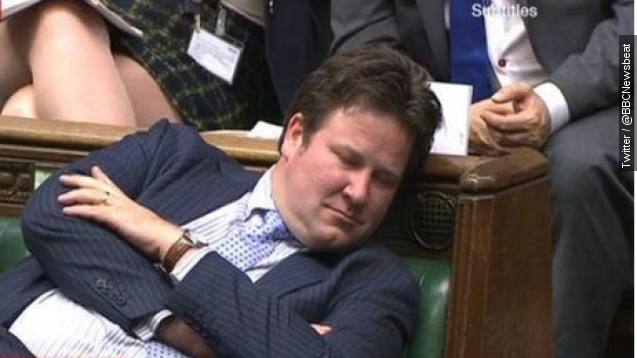 SMS
BBC Apologizes After Suggesting Partially Deaf MP Was Asleep
By Lexie Hammesfahr
By Lexie Hammesfahr
September 15, 2015
The BBC is in hot water after tweeting an incorrect observation that one member of the U.K. Parliament was asleep during a debate.
SHOW TRANSCRIPT

The BBC is in hot water after tweeting a picture of a member of Parliament who — at first glance — looked to be asleep during a trade union bill debate.

Except Tory MP Alec Shelbrooke wasn't asleep. He is partially deaf and sank in his seat to listen to the speaker on the wall.

The BBC's original tweet, which has since been deleted, said, "This pic of Conservative MP for Elmet and Rothwell, Alec Shelbrooke, resting his eyes during a debate is going viral."

Shelbrooke told one media outlet: "I had taken part in the debate and was trying to hear the wind ups. Seems a shame I get trolled due to being slightly deaf."

An ITV correspondent later tweeted a picture of the MP in the same position but with his eyes open.

The Internet is less than thrilled about the BBC misrepresenting Shelbrooke's actions.

One person even pointed out lots of members of Parliament get close to the speakers when it's loud in the room.

The BBC expressed their "very heartfelt apologies" to Shelbrooke in a later tweet, which Shelbrooke retweeted.