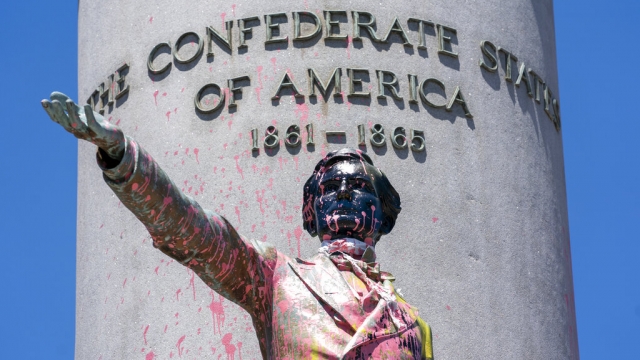 SMS
Virginia Politician Works To Rename Jefferson Davis Highway
By Amber Strong
By Amber Strong
July 27, 2020
Highways around the country were often named after Confederate leaders as part of the ‘'lost cause" movement or during times of racial tension.
SHOW TRANSCRIPT

Virginia is home to the Jamestown settlement, Jefferson’s Monticello and the birthplace of George Washington.

The state is so covered with historic artifacts you could walk right by one and not notice.

"I did not know who Jefferson Davis was until I got to about Middle School. And when we got to middle school, I found out that he was the president of the Confederacy," said Cole.

Now at 30 years old, Cole, the first African-American elected in his district, is preparing legislation to change the name of Jefferson Davis Highway in Virginia.

Historian Tammy Ingram says many highways named after Davis were the result of the "lost cause" ideology that began in the late 1800s.

Ingram says as time passed, roads across the country were named after Confederate leaders, often during periods of racial tension like after the 1954 Brown v. Board of Education ruling.

Cole says some of his constituents have concerns about a name change.

"You're also finding out a lot of business owners that are not happy with the push for the name change because they're going to have to submit, you know, address change and update their websites," he said.

Cole is on one side of the argument over Confederate symbols in public spaces. President Trump is on the other, tweeting about preserving the monuments, statues and military bases 17 times since May.

Americans are split. A poll from Newsy and Ipsos shows 47 percent oppose removing the monuments while 45 percent support it.

"I'm really surprised that we're still having a hard time getting to the root of eradicating the Confederacy from the public spaces in America," said Mitch Landrieu, former mayor of New Orleans.

In 2017, former New Orleans Mayor Mitch Landrieu made headlines when the city began to remove four monuments of Confederate leaders.

Landrieu says he had to confront those with deep connections to the symbols by explaining their origin, something he admits he didn’t know himself.

"The truth is that they weren't taught the correct way. That's what the 'lost cause' is about. It actually was a propaganda campaign to tell a story that never was ours.  To take four years of our history and make it as though it was all of our history," he explained.

Others, he says, knew the history and came to New Orleans to fight to preserve it.

"One of our major findings is that we live separately," said Landrieu.

Since leaving office, Landrieu has traveled to 13 states with his E Pluribus Unum project and gotten to know people, particularly southerners with emotional ties to the symbols.

He hopes the studies from the project and recorded conversations can better explain the nation’s racial divides and ways to fix it.

"A lot of people came have come to me and said, 'Now that I know, now that I understand that, I've been able to put myself in the shoes of that little girl that you asked us to put ourselves in her shoes when she looked up at that monument and asked whether or not that monument lifted her up or pushed her down. I get it,'" he said.

In Virginia, Cole says renaming Jefferson Davis Highway in a state with such rich ties to history may be a battle, but one he’s ready to take on.

"I'll have those hard conversations. But those who don't want to understand and refuse to hear where we're coming from. I have to shake my feet, keep on moving," Cole declared.