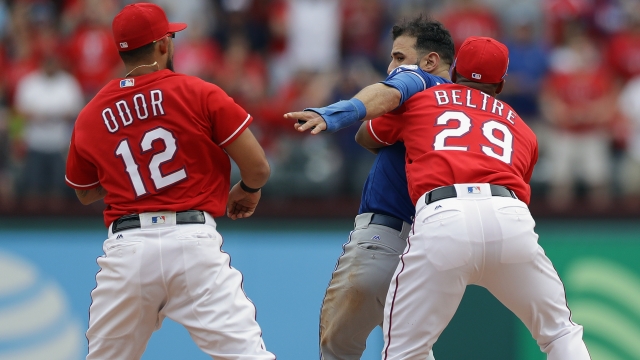 SMS
Basebrawl: Players Fight Over Baseball's Written (And Unwritten) Rules
By Matt Moreno
By Matt Moreno
May 16, 2016
A brawl erupted between the Toronto Blue Jays and Texas Rangers after the Blue Jays' Jose Bautista slid hard into second base.
SHOW TRANSCRIPT

It was the punch heard around the baseball world on Sunday: Rangers second baseman Rougned Odor delivering a hard right hook to the face of the Blue Jays' Jose Bautista.

And all of it occurred because of baseball's unwritten rules.

This story actually starts way back in October when the Rangers and Blue Jays were facing off in the ALDS.

Bautista launched a three-run home run in Game 5, the eventual game winner, but stared at the ball for a few seconds before enthusiastically flipping his bat to the side — both big no-no's in baseball's unwritten rulebook.

Fast forward to Sunday. In the eighth inning, during what would be Bautista's last at-bat against the Rangers in the series, Rangers pitcher Matt Bush plunked him with a fastball.

On the next groundball, Bautista slid in hard to second base, and the punches started flying.

While Bautista's slide was a perfectly legal way to break up a double play last year, the MLB actually banned it starting this year. Now, rolling block slides can get both the runner and batter out.

Bautista's slide, legal or not, was also seen by some as intending to injure Odor — another unwritten rule you shouldn't break in any sport.

But Bautista might not be the only guilty party here. As former MLB player Torii Hunter points out, Odor might've dropped his arm down a bit to try to hit Bautista with the throw — again, a no-no.

Regardless of intent, both teams are likely to hear from the league office this week, with fines and suspensions expected.