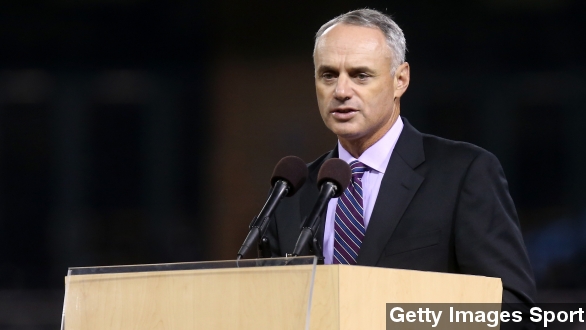 By Matt Picht
August 14, 2014
Rob Manfred, the current COO for Major League Baseball, has been elected to succeed current commissioner Bud Selig when he retires in 2015.
SHOW TRANSCRIPT

Manfred is the current COO for MLB, and Selig's longtime right-hand man. He's notable for having presided over three conflict-free labor negotiations in 2002, 2006, and 2011, along with a tough investigation into the league's Biogenesis scandal which broke last year. (Video via ESPN)

Manfred is largely seen as Selig's heir apparent, and his election is also likely to be read as a continuation of Selig-era management.

MLB's official announcement of the news included this statement from Selig: "The unanimous vote of the owners reflects our industry's position that Rob Manfred is the best person to lead our game forward. ... I believe he is an outstanding choice who will bring true passion and leadership to Major League Baseball." The press release also highlighted the unanimity of the final vote.

But although the final ballot was unanimous, Manfred's election was initially stalled by opposing candidate Tom Werner, a part-owner of the Red Sox, who garnered just enough votes on the first few ballots to keep Manfred from the 23-vote majority he needed to win the spot. (Video via YouTube / Mike Petraglia)

That opposition was mostly spearheaded by White Sox owner Jerry Reinsdorf, a longtime friend of Selig who, as The New York Times reported back in May, "is concerned that his power could wane under Mr. Manfred."

But the owners eventually reached a unanimous verdict after negotiations went into the extra frame. Reinsdorf released a conciliatory statement Thursday: "While Rob may not have been my initial choice for commissioner, the conclusion of a very good process was to name Rob as the person best positioned to help baseball endure and grow even stronger for the next generation of fans."

Now that baseball has a new commissioner, plenty of people in the media are lining up to tell Manfred what he should change about the sport. Popular suggestions include revising the replay system and finding ways to connect younger fans to the game.

Manfred will assume the role of commissioner at a pretty good time for baseball — the sport is bringing in an estimated $8 billion of revenue a year, and that number is expected to grow.