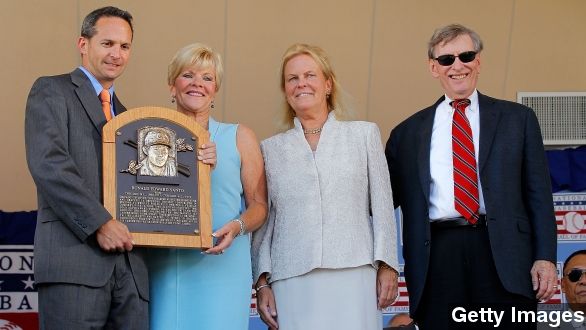 By Jake Godin
July 26, 2014
The National Baseball Hall of Fame is making a policy change that will narrow the window in which "steroid era" ballplayers will be eligible.
SHOW TRANSCRIPT

As if getting into baseball's Hall of Fame wasn't hard enough already — players now have only 10 years to be considered for the honor rather than 15. (Via Getty Images)

Along with the decreased eligibility time, the Hall of Fame says voters will now be required to register and sign a code of conduct. In a display of transparency, who's voting will also be made public.

More likely than not, the code of conduct for voters is likely a result of a Hall of Fame controversy last year. That's when ESPN's Dan LeBetard handed his ballot over to Deadspin, essentially breaking an unwritten rule of secrecy among voters.

Voting takes place very year. The Baseball Writers Association of America along with three committees of the sport's veterans all cast ballots for former coaches and players.

"It's become clearly evident ... that after 10 years the likelihood of election is incredibly minimal. So that the idea of making it more relevant was attractive to the board." (Via MLB)

While that's all the Hall of Fame would officially say on the matter, the decision has some questioning if the change wasn't made for another, more cynical reason.

The "steroid era" Morosi refers to is the period of MLB history stretching roughly between the late 80s and late 2000s, during which numerous players are believed to have used steroids to enhance their performance. (Via Getty Images)

Affected by the narrowed eligibility window at the Hall are star athletes like Barry Bonds, Rafael Palmeiro, Roger Clemens and Mark McGwire — the last of which will have only two years left to enter the Hall of Fame. (Via Getty Images)

The Hall of Fame denied the idea that they lowered the ballot time to keep out these stars, but that hasn't stopped sites from speculating.

A writer at the San Jose Mercury News notes that even with the denial, "several members of the Baseball Writers Association of America said that the practical effect is that there will be no more toeing the line when it comes to the controversial candidacy of players."

Bleacher Report says either way, the change makes practical sense: "There's no need for a retired player who has been sitting on the couch five years to wait potentially 20 years after playing his last game to make it to the Hall of Fame."

The changes are the first to be made since 1991 and only the second time Hall of Fame rules have been altered since 1985.