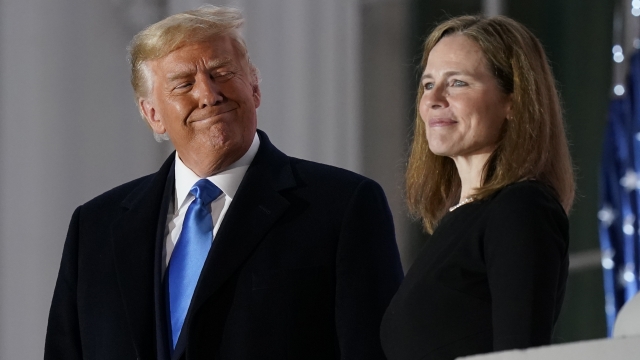 The confirmation of Justice Amy Coney Barrett could impact a number of high-profile cases the Supreme Court is reviewing.

Starting next week, the bench will hear cases on LGBTQ rights, religious freedoms, and Barrett – who openly opposes abortion rights – could comment on a Mississippi abortion case. On Nov. 10, the top court hears a case challenging The Affordable Care Act, or Obamacare – an important case to President Donald Trump.

Justice Barrett could also rule on cases involving absentee voting in North Carolina and Pennsylvania. However, a Pennsylvania court filed legal papers Tuesday arguing that Barrett "should not take part in the Pennsylvania case."

One case that could spark controversy and test Barrett's loyalty to the president is the Supreme Court weighing a plea from President Trump to prevent the Manhattan District Attorney from acquiring his tax returns.

Barrett declined to commit to Democratic demands that she step aside from any cases on controversial topics, including a potential post-election dispute over the presidential results.

Barrett was confirmed Monday by the Senate in a 52-48 virtual party line vote.

Additional reporting by Mark Sherman of the Associated Press.