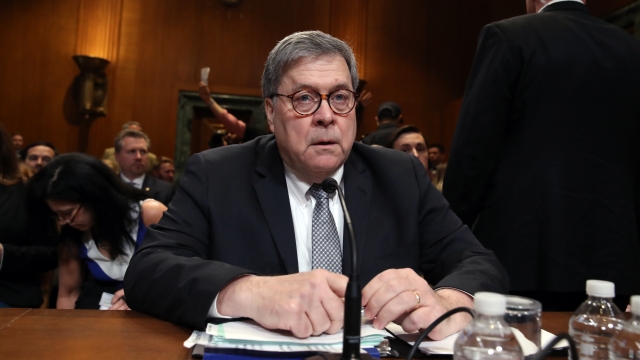 SMS
Barr Rules Some Asylum-Seekers Aren't Eligible To Be Released On Bond
By Katherine Biek
By Katherine Biek
April 17, 2019
His order means tens of thousands of people could be detained indefinitely while their asylum proceedings play out.
SHOW TRANSCRIPT

Tens of thousands of migrants seeking asylum in the U.S. could be detained indefinitely while a judge decides their case under a new order issued Tuesday by Attorney General William Barr.

His decision reverses an immigration court ruling made in 2005. That ruling said asylum-seekers who crossed into the U.S. illegally could be eligible to be released on bond while their proceedings played out so long as they passed their "credible fear" interviews.

In his order, Barr wrote, "I conclude that such aliens remain ineligible for bond, whether they are arriving at the border or are apprehended in the United States."

Earlier this month, a Trump administration official told The New York Times that more migrants should be rejected during their "credible fear" interview.

According to U.S. Citizenship and Immigration Services, just over 76 percent of the more than 97,000 migrants who completed those interviews in fiscal year 2018 were found to have a credible fear of persecution.

Barr said Tuesday his order will take effect in 90 days, so the Department of Homeland Security can "conduct the necessary operational planning for additional detention and parole decisions."

The ruling does not affect migrants who request asylum at ports of entry or migrant children traveling alone or with their families. Barr said the DHS will be able to grant parole to individual asylum-seekers at its discretion.