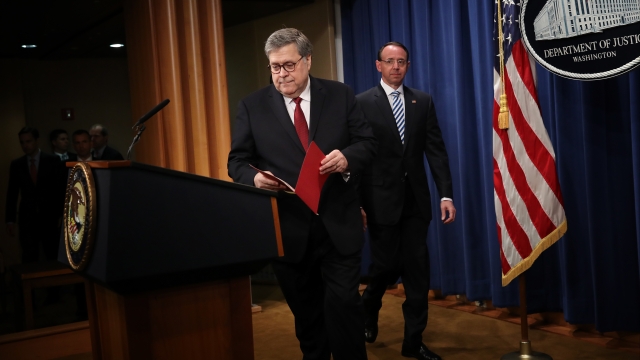 SMS
Barr 'Surprised' Mueller Didn't Come To An Obstruction Conclusion
By Katherine Biek
By Katherine Biek
May 1, 2019
The congressional hearing comes a day after outlets said Robert Mueller was unhappy with the attorney general's 4-page summary of the Russia report.
SHOW TRANSCRIPT

But before he began answering questions, he told committee members he was surprised Mueller didn't come to a clear conclusion on whether President Trump obstructed justice.

"We were, frankly, surprised by that they were not going to reach a decision on obstruction. And we asked them a lot about the reasoning behind this and the basis for this," Barr said in his opening statement.

Barr's opening statement on Wednesday differed quite a bit from his prepared remarks the Justice Department released the day before.

He'd been expected to say the DOJ was now finished with the Mueller probe and that "from here on, the exercise of responding and reacting to the report is a matter for the American people and the political process."

He instead laid out how he responded to a March 27 request from Mueller to release more information about his findings. That's because the special counsel felt Barr's 4-page summary he released a few days earlier was lacking necessary context to the 400-plus-page report.

The committee's hearing marks the first time Barr's been questioned by lawmakers since a redacted version of Robert Mueller's confidential report was released April 18.