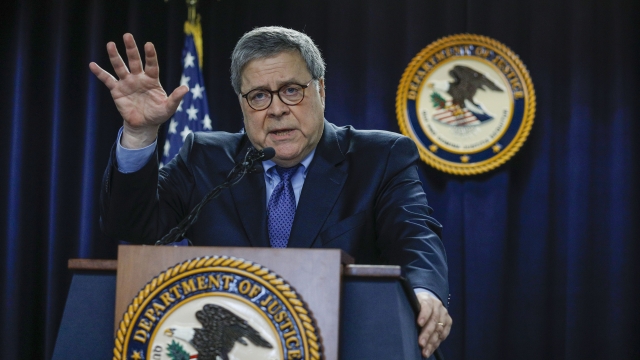 SMS
Barr Says The President's Tweets Make His Job 'Impossible'
By Meg Hilling
By Meg Hilling
February 14, 2020
In an interview with ABC, William Barr said, "I cannot do my job here at the department with a constant background commentary that undercuts me."
SHOW TRANSCRIPT

In an interview with ABC, Barr said, "It's time to stop tweeting about Department of Justice criminal cases." He added: "I cannot do my job here at the department with a constant background commentary that undercuts me."

Following the president's remarks, all four federal prosecutors in Stone's case withdrew from the proceeding after the Justice Department took issue with their sentencing recommendation. The DOJ is arguing in a new filing that the initial recommendation of seven to nine years in prison "could be considered excessive and unwarranted" and that Stone should receive "far less" prison time than prosecutors recommended, but that it would leave the decision up to the court.

Barr told ABC the president's commentary on Stone's case places the Justice Department in a position that may lead some to question its identity of being independent.

Barr told ABC, "I'm not going to be bullied or influenced by anybody ... whether it's Congress, newspaper editorial boards or the president."

Barr has agreed to testify in March before the House Judiciary Committee, where he is expected to be questioned on the sentencing of Roger Stone.