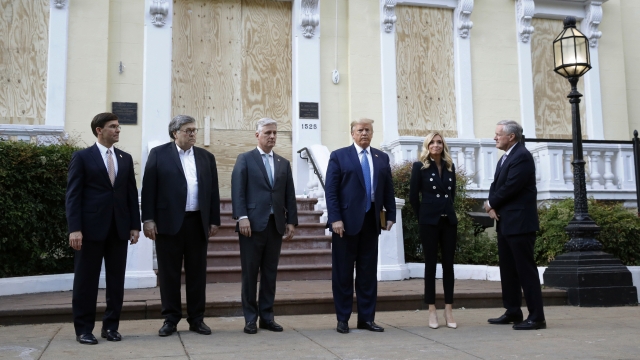 SMS
Barr Pushes Back On Claims He Ordered Police To Clear Protesters
By LeeAnne Lowry
By LeeAnne Lowry
June 6, 2020
Barr says he didn't make the call to clear protesters from Lafayette Park before President Trump went to a nearby church for a photo op.
SHOW TRANSCRIPT

The move drew heavy criticism after smoke bombs and pepper balls were fired on a largely peaceful group to clear the area. President Donald Trump, Barr and other leaders then walked to a nearby church for a photo op. The series of events played out on live TV.

Barr says there was no connection between dispersing protesters and the president's appearance at the church, where he posed holding a Bible.

White House spokeswoman Kayleigh McEnany had said it was Barr's decision to push out the crowd. But Barr told the Associated Press that while he supported the move, it was already in the works when he arrived.

He said, "I was frustrated and I was also worried that as the crowd grew, it was going to be harder and harder to do. So my attitude was 'Get it done,' but I didn't say, ‘Go do it.’"

Additional reporting by Michael Balsamo of The Associated Press.