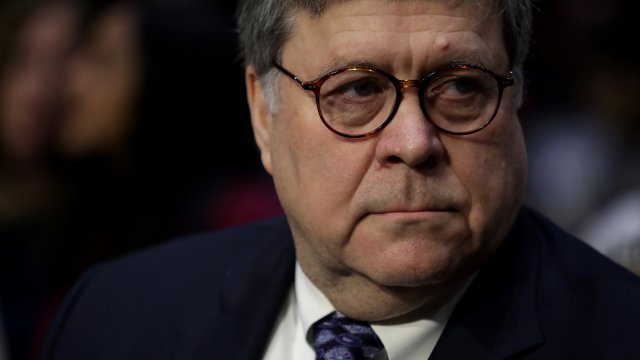 SMS
Barr's Mueller Memo At Center Of Confirmation Battle
By Alexandra Miller
By Alexandra Miller
January 15, 2019
Bill Barr will likely become the next U.S. Attorney General, but he may run into tough questions about a lengthy 2018 memo he authored.
SHOW TRANSCRIPT

Attorney General nominee Bill Barr says he will take a hands-off approach to Robert Mueller's investigation. But his previous actions on executive privilege will be a major source of contention in his confirmation hearings.

In 2018, Barr sent an unsolicited, 19 page memo to both President Trump's lawyers and the Department of Justice about Mueller's "Obstruction" Theory. If it's any indication, yes, he used quotes around the word obstruction.

In the memo, he called Mueller’s "obstruction theory fatally misconceived" writing specifically about this moment when Trump discussed FBI Director Jim Comey's firing in an interview.

"Regardless of recommendation I was going to fire Comey. This Russia thing with Trump and Russia it was an excuse from democrats for losing an election they should have won," said President Trump.

Barr went on to say "Mueller is proposing an unprecedented expansion of obstruction laws, because, he says, "the President, as far as I know,is not being accused of engaging in any wrongful act of evidence impairment."

The Russia investigation isn't the first time he's dealt with presidential power. During the Bush-41 administration, the then-deputy attorney general told the president he could declare war against Iraq without permission from Congress. Bush could continue that war, Barr said, even if they objected.

Barr also served in the Office of Legal Counsel, almost immediately publishing a memo dealing with Congress getting in the way of that power. As a lame duck president, Bush pardoned officials facing charges in the Iran-contra scandal, a decision Barr says he was deeply involved in.

If he's to be confirmed in this administration, Barr is likely to face pressure from a president who is known to demand loyalty. Barr said he'll do his job independently, but if his personal views align with the president, the appearance of loyalty may be unavoidable.