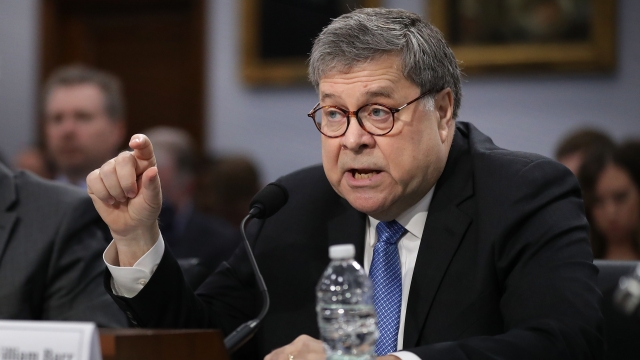 Attorney General Bill Barr says he's planning to release special counsel Robert Mueller's report within the next week, but Congress — and the rest of America — likely won't see all of it.

That's because Barr is working with the special counsel right now to redact four main topics throughout the report. First, he says he wants any grand jury information to remain a secret. Barr says Mueller served 2,800 subpoenas, and Democrats worry everything related to that could be redacted. This is not specific to the Mueller investigation but is consistent with other procedures with grand juries. Still, Barr could ask a judge to make it public.

Second, he's going to redact anything the intelligence community believes could reveal intelligence sources and methods.

Third, any details that could interfere with ongoing prosecutions. There are also potential investigations involving the president in the Southern District of New York.

"You will recall that the special counsel did spin off a number of cases that are still being pursued, and we want to make sure none of the information would impinge upon even the ability of prosecutors to prosecute the case or the fairness to defendants" Barr explained.

And lastly, Barr told the House Appropriations Committee that he's going to redact anything that could implicate "the privacy or reputation of peripheral players where there is a decision not to charge them."

Barr's assurances did little to appease Democrats. The four topics are broad, and much of the information they may want to see could fall under those categories. Congressman Ed Case showed a heavily redacted document from then-acting Attorney General Rod Rosenstein to Robert Mueller.

Barr explained that each topic will be given a color, and each redaction will be color-coded so those reading the report will be able to understand why the redaction exists.

Barr says after he releases the redacted report, he'll discuss any further requests with the House and Senate judiciary committees.